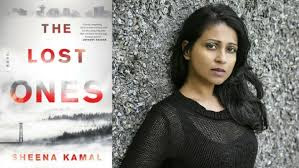 Nora, the sleuth from the streets, in The Lost Ones by Sheena Kamal has a unique talent honed by a lifetime of surviving. She is a human lie detector.
To detect lies she likes to ask a provocative leading question.

Trying to determine where a witness was the night before she might ask:

If the questioned responds with “questions of his own to discern how much you actually know” she is dealing with a liar.

She also carefully catalogues the body language of the liar:

A flicker of the eye. A twitch at his lips. Tapping fingers or an involuntary clench of the jaw. An almost imperceptible shift in tone.

Where Nora studies the words and body of a person she is questioning fictional sleuth, Decker Roberts, in The Junction Chronicles trilogy of David Rotenberg is a different form of human lie detector.

A synasethete Roberts, while listening to someone, can close his eyes and from the patterns he sees know if the truth is being told. It is a gift for which he is well paid and a curse for the danger posed by those who fear him listening to them.

While her techniques work for Nora I have found them of limited assistance in questioning witnesses in court.

Asking an aggressive question is likely to produce a defensive reaction where it can be hard to determine whether the response reflects dishonesty or simply anger at the question.

Subtle body language is too often misleading. Unless you know someone well you cannot tell whether a “twitch” is a sign of the untruthful or a personal tic or nervousness in an unfamiliar setting.

As for the approach of Roberts I often wish I could close my eyes and tell if the person I am talking to is truthful. Alas, I must rely on my observations and experiences.

While it is useful to be alert to non-verbal cues you cannot predict a witness will show any.

With regard to non-verbal cues in 2012 in R. v. S. (N) the Supreme Court of Canada ruled that a woman in a sexual assault case had to remove her niqab while testifying to provide a fair trial.

In Assessing Truthfulness on the Witness Stand: Eradicating Deeply Rooted Pseudoscientific Beliefs about Credibility Assessment by Triers of Fact published in the Canadian Criminal Law Review a trio of psychologists challenge the benefit of the demeanour of a witness in assessing credibility.

They set out the majority position of the Supreme Court:
For instance, the Chief Justice wrote that ‘‘non- verbal communication can provide the cross-examiner with valuable insights that may uncover uncertainty or deception, and assist in getting at the truth”, and that ‘‘covering a witness’s face may also impede credibility assessment by the trier of fact, be it judge or jury.” Furthermore, she stated that ‘‘on the record before us, I conclude that there is a strong connection between the ability to see the face of a witness and a fair trial.”
The Chief Justice said the court would re-consider its position if there were compelling evidence to the contrary.

In good academic language they are exploring “deception detection”.
They conclude:
As reviewed above, several meta-analyses of the detection deception research showed that most cues to deception are too faint for reliable detection, most facial expressions and other non-verbal cues are unrelated to deception, legal professionals (and others) are unable to accurately detect deception beyond chance levels, and that training people to use non-verbal cues to improve their deception detection is unviable.
I agree, as set out above in my personal observations, that such non-verbal cues as facial expressions can be unreliable in isolation. Where I disagree with the psychologists is that I believe such cues can be useful in a trial when added to the other factors involved in assessing a witness. In many trials witnesses are trying to be deceptive. No judge relies solely on demeanour. At the same time how a witness reacts when contradictions within their evidence or documents or past statements or other witnesses are put to them is important. How they speak when giving evidence that accords with agreed facts against how they speak on facts in dispute is relevant.
Most often I seek to determine credibility from the extent of contradictions and statements proven wrong and descriptions of events that are unlikely to incredible.
The topic of “detecting deception” is vast and this post but touches upon some of the issues. It is of daily interest to me in crime fiction reading and real life.
****
Here is a link to the article referred to in the post - http://www.mun.ca/psychology/brl/publications/CCLR.pdf