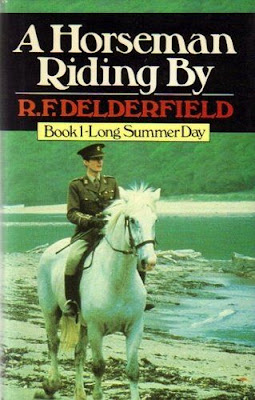 Our downstairs bedroom was renovated this fall. Over the years, especially after our sons left home, it had become a storage room more than a bedroom. Eventually it was full of stuff. Along two walls were bookshelves filled with books, most of them acquired by me 25 - 50 years ago. With the renovation it was a time of reckoning for those books. I had re-read but a fraction of them. We were not going to put up bookshelves again for all of them. It was time to give up a lot of books.

I started going through the tubs and boxes in which the books were stored deciding which would go and which would be kept. How many of them were I likely to re-read? Would either of the boys want any of them?

I knew the books would evoke memories but I had not thought about how going through those books would be a journey through my reading life.

A few books went back as far as high school at St. Peter's College in the late 1960’s. There was a quartet by Sigrid Undset set in 13th Century Norway. My copies show I bought them at the College bookstore. I can remember having to weigh whether I could afford the cost of a new book.

A few more were from undergraduate days at the University of Saskatchewan in Saskatoon. Most of those were works of history from my major in history.

I did find my copy of Guillver’s Travels by Jonathan Swift that I read as part of English 102 in first year university. Father James Grey provided an eclectic mix of fiction and plays for us to read. Reading and reflecting on the original Guillver’s Travels was a revelation. I had only known of it in movie and cartoons. The nuances of the satiric examination of English life and society in the 18th Century showed me the power of fiction.

Father James was the first professor to expect of myself and my classmates that we would read and analyze almost a book or play a week. He loved reflecting and talking about literature. He was a gifted teacher convincing 18 year old students to think about literature. After his death a collection of essays on Father James were published in the book Bush Dweller. I wrote a pair of reviews on the book - https://mysteriesandmore.blogspot.com/2012/02/bush-dweller-essays-in-memory-of-father.html and
https://mysteriesandmore.blogspot.com/2012/02/bush-dweller-essays-in-memory-of-father_22.html

Seeing Bismarck by A.J.P. Taylor brought back vivid memories of a class in 19th Century European history taught by Professor Ivor Lambi. He was a dynamic lecturer. Everyone enjoyed his dramatic re-telling and explaining of history. His speciality was Bismarck. Every year on Bismarck’s birthday, April 1, he invited all his students to his home to drink beer and celebrate the Iron Chancellor’s birthday. Drinking beer and talking history can be a lot of fun.

I did not find any books from law school. It was a time of limited recreational reading.

Since completing university in 1975 most of my leisure reading has been fiction. At one time I thought I would read about one-third non-fiction to two-thirds fiction. It has actually been 80-85% fiction.

There were two non-crime fiction authors whose books I decided to keep.

There was a period when I enjoyed sweeping sagas. My favourite saga author was R.F. Delderfield. I do not know how accurately he portrayed English life from the middle of the 19th Century to the middle of the 20th Century but I loved his books. I consider A Horseman Riding By the best. I have read and re-read the story of Paul Craddock, a wounded Boer War veteran who buys an estate and lives a full life in the country. Seeing the books prompted me to look for the television series. In the past I had hesitated wondering if the series would do justice to the books. While reading the books I longed to visit the English countryside of A Horseman Riding By. As such a trip seems unlikely I started watching the series tonight.

I also enjoyed God is an Englishman, the multi-generational story of the Swann family transport business, and To Serve Them All My Days, the story of a teacher in an English boarding school between WW I and WW II.

The other author is C.S. Forrester. I eagerly read his Horatio Hornblower series. From midshipman to admiral Hornblower served honourably in the Royal Navy when it dominated the oceans of the world early in the 19th Century. Hornblower’s adventures spanned decades of conflict, with France and, sometimes, Spain. No one has written better of life aboard the great men of war ships of that era.

In the mid-1970’s I learned a great deal about United States history by reading the American Bicentennial Series by John Jakes. Also known as the Kent Family Chronicles the sprawling books cover the 200 years the United States had existed as a nation.

My next post will discuss other books in the tubs and boxes especially crime fiction.