The Billionaire Murders by Kevin Donovan 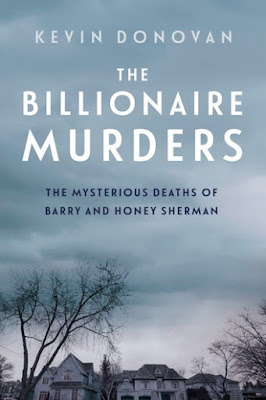 The Billionaire Murders by Kevin Donovan - Two years ago this month Barry and Honey Sherman were found dead sitting beside their indoor pool with jackets pining their arms and belts tied to the railing behind them. They were billionaires with an estimated net worth of $5 to almost $10 billion.

As with Canadians across our land I was instantly drawn to the mystery of their deaths. How had they died? Speculation was extreme.

When a Toronto detective said in interview that evening that there were no signs of forced entry and the police “were not currently looking for any suspects” media reports swiftly announced a suspected murder - suicide.


Family and friends were indignant protesting that the Sherman’s were murdered.

Criminal defence lawyer, Brian Greenspan, puts together a team of investigators and scientists to conduct their own investigation. American pathologists comment that there has never been a murder - suicide by hanging.

When I saw The Billionaire Murders at a bookstore I instantly decided to buy it. I was most interested to see if the book confirmed the information I had been told by family friends some months after their deaths. They told me they never believed it was murder - suicide. They said Barry would never have killed Honey and then committed suicide. They went on to say Barry could never have carried her through the house and hoisted Honey’s body up  as he could not raise his arms over his head.

The only discussion on the book was on the implausibility of the physically unfit Barry dragging Honey through the house to the pool. What was striking was there seems to have been no assessment by the police of the ability of Barry to move his wife, especially in the early stages of the investigation.

The police belief in murder - suicide meant their focus was on seeking confirmation. Their theory was premature. I have seen many times that when police reach a conclusion early in an investigation they cease looking for evidence that might be contradictory.

The autopsy showed death by strangulation and that their wrists had abrasions consistent with being bound. There was injury to Honey’s face done either just before or just after death. It appeared the belts had been used to strangle each of them.

I asked their friends about security at the house wondering about the police observation of “no forced entry”. They told me the Sherman’s never turned on their security system. The book said the Sherman’s did not believe in security systems and there were neither cameras nor alarms at the house. There was a place for a security camera by the pool but it had never been set up.


The Shermans had no security guards or live-in staff. They had a cleaning lady once a week and someone who would come by to water the plants. Despite their wealth they felt uncomfortable hiring people to help them.

Another prominent Toronto Jewish family have the opposite approach to security. The  Reichmann’s live in homes with abundant security.


When the police finally concluded the Sherman’s were targeted murders speculation turned to who would want to murder them.

The book explored some of those court battles. Barry relished court and was a fierce litigant. Over the decades he won and lost cases involving hundreds of millions of dollars. Going to court was just one of the costs of his business.

The suspects with the greatest motivation were the Winter family, cousins of Barry, who had lost a billion dollar lawsuit shortly before the murders. Donovan spoke to the most vocal cousin, Kerry Winter, who openly spoke of his bitterness and denied killing Barry and Honey.

There was tension, even discord, at times between the Sherman parents and their children. There was disappointment in that none of the four children had gone into Apotex.  Jonathon thought his father wasted tens of millions in bad investments. At the same time Jonothon’s business ventures had been modestly successful. Overall the children received millions of dollars and could expect to receive much more.

There were no signs that any of the children were in danger of being disinherited. Though not public the will apparently provided money for Honey during her lifetime and divided the property equally between the four children after she was gone. A major surprise was that Honey did not have a will.

Jonathon wrote to the author, who had written him asking questions which, from the author’s descriptions were straightforward, that “I can only term are his insane accusations that I am implicated in the murder of my parents.”


There were numerous other private lawsuits. It appears almost every builder with whom Barry dealt ended up being sued. My next post will look at some of his court actions. Could some aggrieved litigant have exacted revenge?

The book reads like each chapter was a serialization in a newspaper or magazine. Information is repeated throughout the book.