Heaven, My Home by Attica Locke 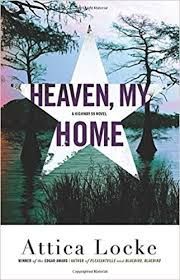 Heaven, My Home by Attica Locke - Texas Ranger, Darren Mathews, is working on relationships. He has returned to working in the Houston office which pleases his wife. He is helping his mother which pleases her and keeps her from revealing what Mathews’ knew about a handgun used to kill a white supremacist. He is also deeply bored and increasingly anxious. Mathews is one of the few black Rangers.


His Mama, Cassie Bell, makes clear she is protecting her dear son as long as he keeps providing financial assistance. The maternal uncertainty is draining.


In the first book of the series, Bluebird, Bluebird, Mathews faced the Aryan Brotherhood of Texas. In a stunning twist he is now asked to investigate a missing 9 year old boy, Levi King.  Levi’s “father Bill ‘Big Kill’ King - is an ABT captain doing a twenty-year bid at the Telford Unit up near Texarkana on a slew of drug-related charges. Sales, production, armed robbery, the works.” Levi is well under way to a racist adulthood.


With Big Kill locked away for decades Mom, Marnie, has taken up with a low level loser, Gil Thomason. Big Kill does not want his son near Thomason.


Having grown up in a household of romantic turmoil Mathews can appreciate Levi’s struggles with  tangled parental problems.


The Rangers and the FBI have been building a major case against the Brotherhood and want to get the evidence needed to indict before President Trump is inaugurated. They are uneasy the federal government will not be pursuing violent white supremacists.


At the same time federal law enforcement would be content, even glad, to see a black man convicted of killing a white child to show the new administration they are race neutral.


Sending a black man to lead the investigation of the missing child of the Brotherhood sounds like a bad, even crazy idea even if there are some black people who need to be interviewed.


Big Marnie and Levi live deep in the woods at Hopetown, a community not on the map, on the edge of the massive Caddo Lake. They are proud public racists subleasing land owned by blacks. Hopetown is a fading community founded by free blacks after the Civil War.


Bill Kill’s mother, Rosemary King, lives in splendour in the largest house in Jefferson and owns the Cardinal Hotel, the pre-eminent hotel in Eastern Texas for over 100 years. She has never had a black guest in her home until Mathews visits with the local Sheriff.


As with Geneva Sweet in Bluebird, Bluebird Locke has created another matriarch who fills pages with her presence. Unfortunately, Rosemary’s role in the book is mainly in the shadows.


Mathews marriage to Lisa remains fragile. When he needs to talk about his feelings he reaches out to Randie Winston, the widow of a victim in Bluebird, Bluebird. He wants his marriage to succeed but does he want it enough?


His drinking is barely under control.


The relationships between white and black and Indian (there are also Caddo Indians resident at Hopetown) Texans intersect historically and currently. Resentments and racism are a constant presence. Relationships confound. And then financial issues intercede. Mathews is having doubts about following the rule of law in contemporary America. Maybe personally administered justice is better.


The question of whether a devout racist can change is a challenge for Mathews.


Heaven, My Home draws readers into the racial complexities of rural East Texas. Finding what happened to Levi will answer many questions but no authorities other than Mathews are truly searching.


A great series is under way with Daren Mathews. The land, history and people of East Texas seep into every page.
****
Locke, Attica - (2016) - Pleasantville; (2017) - Black Water Rising and Wishing I had Read the Books in Order; (2018) - Bluebird, Bluebird and The First Black Texas Ranger in Real Life and Fiction