Firemaker by Peter May 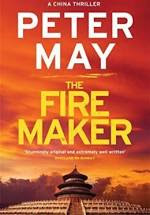 Firemaker by Peter May (1999) - A nanny speaks to the police of a man ablaze in a Bejing park:

“He was still alive. Reaching out
to me, like he was asking for
help.”

Detective Li Yan, on his first day as Deputy Section Chief, investigates the deaths of the fire victim, a drug dealer and an intinerant worker.

Just arrived in Bejing is Dr. Margaret Campbell, a forensic pathologist, from Chicago who is trying to escape from personal tragedy. When authorities discover she is an expert in burn victims she is called upon to conduct the autopsy of the man from the park. She swiftly determines it is murder.

The other deaths were clearly murders. The drug dealer was stabbed while the worker’s neck was manually snapped.

It was one of the fundamental differences, Li thought, between the American approach and the Chinese approach. The Americans placed more stress on motive, The Chinese, preferred to build the evidence, piece by tiny piece, until the accumulation of it was overwhelmingly conclusive. The “why” was not the key to the answer but the answer itself. Perhaps by working together they could combine the virtures of both systems.

Li embarks on a traditional Chinese criminal investigation with extensive interviews and careful reviews of physical evidence but May adds a discordant scene where the “traditional” American threat of physical violence is used to extort information.

Campbell must adjust to China’s distinctly different approach on rights in a criminal investigation:

“According to Chinese law a defendant has the right to defend himself. But he also has a duty to co-operate with the police and the court in uncovering the truth about his case. You might think that the right to defend himself would lead automatically to a right to silence under interrogation, to protect himself, like Americans take the Fifth. Only he also has a duty - to the state, to society - to answer all questions faithfully and truthfully, even if that incriminates him …. The real problem with China is that while the defendant’s rights are pretty well protected in the constitution, they’re often neglected, or even abused, in practice. But there’s a lot of bright people in this country working hard to change that. And not without success. Things are improving.”

Campbell’s knowledge lets her determine the identity of the burned man. Chao Heng is a retired high level bureaucrat in China’s Department of Agriculture who worked on the genetic modification of rice to create a “super rice” that has dramatically increased Chinese food production.

Li and Campbell continue a prickly professional relationship with Li flip flopping over her participation and Campbell resentfully deciding to leave if she is not wanted.

While Li would prefer his accustomed traditional approach he is forced to consider “why” with regard to the murders because a Marlboro cigarette end is found at each murder site. There is no obvious connection.

To discover the “why” Li and Campbell combine reflection on the evidence gathered with reviewing the evidence and the crime scenes.

As they probe they realize powerful forces have acted. I was caught up in the drama of a credible conspiracy.

Li and Campbell flee. It has been awhile since I read of an excellent escape.


The pace of the plot quickened until I was anxious to turn the page to see the resolution. I was reminded of the great early novels of Robert Ludlum creating believable conspiracies that captured the reader.

Firemaker, is the first in May’s China Thriller series.