The Hallows by Victor Methos 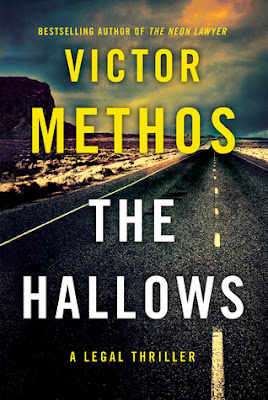 (36. - 1061.) The Hallows by Victor Methos - Tatum Graham has it all. Rich, famous and successful. He dominates the courtrooms of Miami as the defence attorney for the wealthy and infamous. His latest courtroom triumph was getting Marcus Green acquitted of murder. Green liked to tell him his net worth required three commas (over a billion dollars).

“I didn’t get into this profession to lose.”

Tatum believed Green was innocent. When, the night of his acquittal, Green strangles the younger sister of the woman who had been the victim in the just completed trial Graham snaps.

He quits his firm. Gives up his house and Ferrari. Gets in his Tesla and heads for his hometown of River Falls, Utah. He has not been there in 19 years. A “bookworm” as a kid he had fled town upon graduation from high school.

Meeting with his father for the first time since he left town involves a brief exchange of harsh words.

He connects with former high school classmate, Gates Barnes. They had dated. She is now the county attorney. Gates has just resentment over his abrupt exit from town and absence of contact. Graham says:

“I’m sorry. You just … you want to leave behind your past sometimes so bad you forget that there’s people who can get hurt.”

Drifting, Tatum is uncertain what he wants to do, After a chance meeting with the father of the victim, Tatum looks at a pending murder case, the only one the county has had in years. Patty Winchester, a 17 year old girl was raped, tortured and murdered, and her body found outside of town. Tatum’s quick analysis of the police investigation discloses multiple flaws. In response Gates says:

“I’m asking for your help. But I understand if you can’t. If you just want to run away.” She rose. “It’s what you do best.”

Guilt can be a powerful motivation and it sends Tatum to get his district attorney badge and take charge of the case. He is as aggressive a prosecutor as he was a defender.

The mistakes in the investigation are promptly addressed. Quality experts are retained. Witnesses are re-interviewed. The body is exhumed for further examination.

For all the flash and swagger of his approach to prosecuting (defending) a case Tatum excels in the detail of evidence. While his planned book The Art of Jury Trial at War is filled with clever remarks such as “No risk, no reward” it is his hard work at preparing the case that is most important.

The plot twists and turns as there are revelations about character after character.

Tatum is suspicious when Pritcher demands and gets an early trial date but despite all his experience and wiles he cannot figure out the defence Pritcher has planned.

The pages race by as preparation for the trial accelerates.

The Hallows has an explosive finish that disappointed me as it was a classic thriller ending. It was well done but the resolution had little to do with Tatum’s legal skills. It would have been far better though undoubtedly less dramatic to see Tatum maintain his streak of never having lost a trial by his talent in the courtroom. Scott Turow’s book, The Last Trial, whihc I read earlier this year has a courtroom ending with lots of drama.

I intend to read more of Methos. He is a talented writer and I hope has used the courtroom to resolve a plot.  Congratulations again to Methos for winning the 2020 Harper Lee Prize for Legal Fiction with The Hallows.