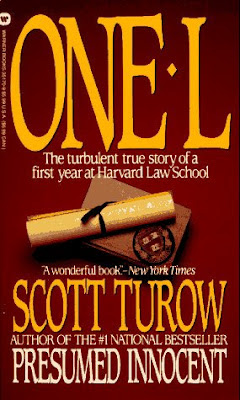 One-L by Scott Turow (1977) – My last post was a guest review of One-L by my son, Michael, who finished first year law in April of this year. In this post I present my review of the book. I did not read Michael’s review until I had written this review so I could not be influenced by his thoughts. My next post will have some thoughts on the reviews of myself and Michael.

The book is a combination of fiction with regard to the identities and information of those named other than the author and a memoir of Turow’s memories. The book is told in the form of a first person narrative that is very vivid.

Turow accurately tells of the confusion of first year law students as they encounter an educational program different from any they have experienced. Professors teaching students of that era in arts and sciences would hope students were prepared. Law professors expected careful preparation before classes.

Turow portrays the desperate effort at the start of first year to fully brief all of the assigned cases. He outlines a life where 1L’s, including himself, became full time daily residents of the law school library. Relatively few of my class became so obsessed.

The law school Socratic process of being picked out by certain professors and finding out there were no clear right answers was a familiar experience. I had professors who were just as intimidating as Turow recounted with Professor Perini in Contracts.

I never worried as much about my responses and those of classmates as Turow and his section agonized over at Harvard. I just admired those few with the ability to provide thoughtful answers in the pressure of law school classrooms.

It took time at the , as it did for the 1L’s of Harvard, to figure out going to class was truly optional when none of the year’s mark was based on the classroom.

The drama of first year exams was comparable. The building of anxiety over a single exam determining the mark for the course affects every student.

My class had an extra level of pressure not present at Harvard 5 years later than my first year. We knew 20% of our class would fail. It is my bitter memory of law school that there was an arbitrary, though un-stated, fail percentage. At Harvard few would fail though all would be humbled by the year.

Nothing in my university experience prepares you for a law school exam which provides complex sets of facts and asks you to discuss the law. For students accustomed to gliding along and simply providing back to professors what they have been taught the law school tests are daunting. You have to think.

Turow expresses his anger over a 4 hour exam at the university or an 8 hour take home exam actually determining your knowledge of the subject and your ability to be a lawyer. I have come to realize that the format of the law school exam is the type of test faced every day by a lawyer dealing with a new client or facing an unexpected issue during a trial. The tests tell something of the ability to think under intense pressure. Still I do think it is unfair to put all the year on a single exam and never want the experience again.

Turow does an excellent job of the angst of 1L’s receiving grades in B’s and C’s rather than the A’s which have dominated their pre-law days. Harvard’s 1L’s are deeply resentful. They cannot bear the thought they are no longer among the elite of their academic group. It is an arrogance few at Harvard recognized. For myself, I was happy to escape 1st year with a 68 average. It was enough for me that I had passed.

Turow further touches upon a disconnect that made law school a strange place for me. Unlike all my other educational experience there was no correlation between study and exam performance. The courses in which I studied the least were usually my best marks.

Both Turow and myself  enjoyed being part of the brightest group of people with whom I had taken university courses.

For the 1L’s of Harvard and my class it was the most intense intellectual effort of university days. It was the first time I had committed everything I had in me. I was exhausted at the end of first year law.

Reading One-L will provide an excellent perspective on why law students of the 1970’s say they survived first year law. (Aug. 11/12)