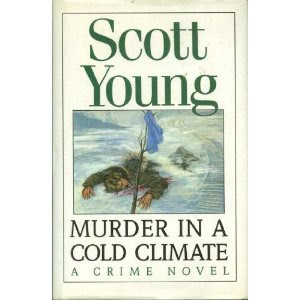 Murder in a Cold Climate by Scott Young (1988) – Matthew “Matteesie” Kitogitak is the most unique sleuth I have encountered in years. He is from the last generation in the North to have spent their early years living off the land. During his lifetime he has gone through the dramatic transformation of northern life to a contemporary lifestyle. Joining the RCMP when indigenous northerners were limited to being “special” constables he has reached the rank of Inspector, the only Inuk RCMP Inspector of the late 1980’s. In appearance he is far from a handsome chiselled hunk. He is 5’6” with a developing pot belly. He is unhappily married to Lois in . Though committed to the marriage he has a long continuing intimate relationship with Maxine in .

Lastly, he has a mischievous, witty, slyly humourous, bantering personality illustrated by his nickname, Matteesie. (In my reviews of Stan Jones books set in northwest I discuss the same playful indigenous communication.)
The book is set in the harsh northern winter. Young evokes the Canadian approach to winter. Only in and other far northern countries is the following conversation credible. I have heard it throughout my life:


As we walked our breath made little frosty clouds that blew between us as we walked. There wasn’t much to say.


“Minus thirty-five, according to the radio,” I said.


Matteesie is getting ready to leave for an Arctic Institute Conference in in the U.S.S.R. when he is directed by the RCMP Commissioner to investigate a plane that has gone missing in the area of . The son of ’s Finance Minister happened to be the pilot. Adding to the mix his passengers are suspected drug dealers.


On Matteesie’s flight to a stretcher is loaded on the plane. A Northwest Territories Metis leader, Morton Cavendish, has had a stroke and is being airlifted for treatment in .


As Matteesie prepares to leave the plane by the rear exit a man walks up the exit steps, moves up to the unconscious man and fires 3 shots into Cavendish’s head. The shooter, before Matteesie can reach him, rushes out of the plane and jumps on an idling snowmobile and disappears into the bush next to the runway.


Frustrated and mad at both being unable to prevent the murder and pursue the killer Matteesie is determined to find the murderer.


Cavendish’s son, William, has disappeared and Matteesie starts searching for him in . While few are willing to talk Matteesie eventually gets some information from George “No Legs” Manicoche, a trapper who had his legs amputated, He had gotten drunk and passed out in the snow and his legs were badly frozen.


While Matteesie uses modern transportation most of the time he and No Legs join a white teacher, Edie McDonald, on a dogsled search into the wilderness that harkens back to an earlier era of the North. I will discuss their trip in my next post on Thursday.


Matteesie knows the resolution of the case will be found in the bush. He is glad to spend time outdoors. His status as an Inspector and then working with the Federal Government has kept him indoors. Riding a snowmobile he reflects:


As I bumped along, a feeling of peace gradually came over me. Much of my life, both before I signed on as a special and after, I’d spent time out in the bush or the tundra with snow machines or dog teams. On long trips I might have an objective many days away but the important thing was always just to get through the next few hours before night and food and sleep. On such a trip the mind roams free. I hadn’t felt this good for a long time, leaving behind conferences, memos, reports, the trying to convince others this policy was good and that bad, being polite with deputy ministers and deferential with the political ministers who came and went like migrating geese.


If you are ready to leave the city and head into the wilderness of northern search out a copy of Murder in a Cold Climate. It is worth the effort. While Young may have spent most of his life writing about sports he has crafted a good mystery. The characters are true northerners. The geography and weather of the North play an important role as they do in real life. The North is integral to the plot. I expect readers will long remember Matteesie. I longed to join Matteesie on a northern journey. (Nov. 6/12)
Posted by Bill Selnes at 12:29 AM