2012 Trip to Sleuth of Baker Street 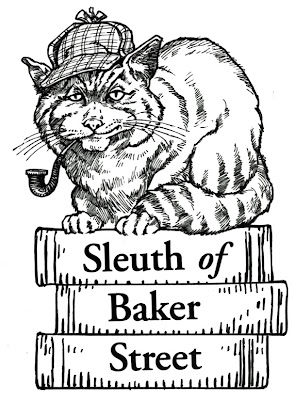 Two weeks ago I was in Toronto for the Grey Cup (the Canadian professional football championship). I made time to take the subway and bus to the Sleuth of Baker Street bookstore. It would not be a trip to Toronto unless I went to the store. My last visit about which I put a post was a year ago.


I arrived early Friday afternoon to find Marian at the store. She said J.D. was visiting in Ottawa. While J.D. was gone she was not alone. Her dog, Percy, was curled up beside the counter at the front of the store. Periodically he would make a circuit around the store to check out customers.


On this trip I specifically wanted to look for books from a few Australian and New Zealand writers whose books I had not found in Western Canada. I was to be disappointed. I was not able to get books by Y.A. Erskine, P.M. Newton, David Owen and Vanda Symon. Marian said it is difficult to get books by Australian and New Zealand writers unless they are published in North America or England. She said there is no wholesaler they can deal with in Australia. I will keep poking around used bookstores in the hopes of finding some of their books. An alternative would be another trip to Australia and a first time trip to New Zealand. I doubt Sharon would see the wisdom in travelling thousands and thousands of kilometers to get crime fiction.


While unable to get some of the books I wanted there was an abundance of other choices in the thousands of mysteries and thrillers they have for sale. In the end I forced myself to place only 5 books on the counter for purchase.


Before going to Toronto I had been looking in the November issue of their fine bi-monthly newsletter, Merchant of Menace, and looked at some of the recommendations from that issue. 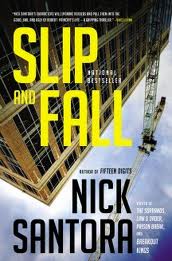 It has been awhile since I bought a book involving lawyers so I was attracted to Slip and Fall by Nick Santora. It is about a Brooklyn lawyer that J.D. describes as a ham-and-egger which sounds like it might be like my practice.


I have enjoyed the first two books in the Milo Weaver series by Olen Steinhauer. I added the third in the series, An American Spy, from Sleuth.


This year I have started reading Canadian author L.R. Wright. I was able to buy the 4th book in the Karl Alberg series, Fall From Grace.


I found down in the “W’s” the 6th in the Maisie Dobbs series, Among the Mad, by Jacqueline Winspear for which I posted a review on Tuesday.


Looking around the store I checked for Arthur Upfield mysteries featuring Napoleon “Bony” Bonaparte but the only books for sale were early hardcover editions marked at $75.00. As I buy books to read rather than as investments I passed on them.


It is so nice to visit with a bookseller knowledgeable about mysteries. She loves mysteries. Marian knew every author in which I was interested. She basically knew without looking whether they had a book for which I was searching for purchase. She freely offered her perspectives on books I was considering. She is not afraid to tell a customer, if asked, her opinion. She will say if she liked or did not enjoy the books of an author. In the big chain bookstores I am glad if I can find a clerk who can determine from the computer if they have a mystery in which I am interested.


In the just over an hour I spent at the store there were several other customers. None of them left without buying books. I hope Sleuth can stay open for many more years.
Posted by Bill Selnes at 11:28 PM