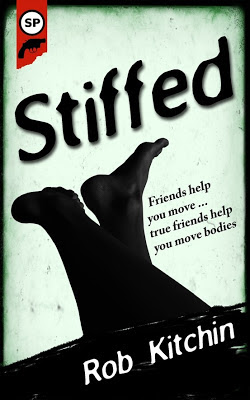 Stiffed by Rob Kitchin – Tadhg Maguire, an Irish newcomer to America, has a wakeup to remember. After falling into bed drunk he painfully wakens in the morning thinking his girlfriend, Kathy, is snuggled against him. His mind clears instantly when he realizes it is the huge dead body of Tony Marino, a local mobster in Carrick Springs. His confusion over what is going on is exacerbated when Kathy hits him with a lamp, stamps out an erection and knocks him out with a powerful swing of the lamp. On awakening again he tries to figure out what to do with a body in his bed.


The screwball noir book is well under way. Tadhg’s experience reminded me of another screwball character, Corporal Renfrew of the Mounted. Canadian comedian Dave Broadfoot had a signature line for his character Renfrew of the RCMP after Renfrew was invariably knocked out in an investigation. Broadfoot would intone "When I regained consciousness..."


Doubtful the police can help especially with regard to the mobster’s boss, Aldo Pirelli, Tadhg enlists the help of his best friend, Jason Choi, to help dispose of the body leading to the phrase for which the book will best be remembered:


After getting Marino’s body Tadhg is doing some cleaning when two intruders break in to his home. Barely breathing he keeps carefully hidden. After one of them, Junior, is killed by the other Tadhg now has a second body in his house.


Slipping down the street to the home of his best friend, Jason, he tries to explain why there is a second body in his house.


Another friend, Annabelle Levy, joins them in the effort at body disposal.


Having wrapped up the bodies they call on their friend, Paavo Poukkanen, to bring his van so they can dispose of the bodies.


Stiffed is a fun book. No reader will be intellectually challenged. There are no complex troubled characters but there is enough reality to the plot. It is a literary romp to be enjoyed at a breathneck pace. Readers will enjoy and identify with Tadhg’s very, very, very, very bad day.


While I abhor the term “beach reading” it would be a good book to take on summer vacation. You are bound to chuckle while reading it.


I thank the author and fellow blogger for sending me a copy of the book. I am glad I read the book. It is about as different a work a fiction as possible from the grim The Rule Book, an earlier book of Rob, I read this year. Rob has a flair for farce. (June 25/13)
Posted by Bill Selnes at 10:25 PM