When the Saints Go Marching In by Anthony Bidulka 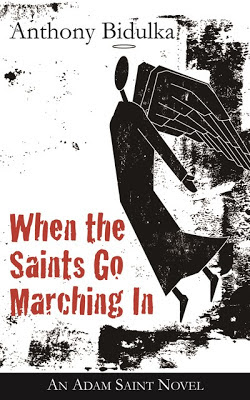 29. – 718.) When the Saints Go Marching In by Anthony Bidulka – Adam Saint is a Canadian Disaster Recovery Agent. When trouble finds Canadians outside Canada Saint or another agent is dispatched by the Canadian Government’s CDRA (Canadian Disaster Recover Agency) to deal with the situation. CDRA is a part of the International Intelligence Agency’s (IIA) Canadian operations.


One of the passengers killed in a Siberian plane crash is Canada’s Governor General. With Saint just back from another mission the CDRA sends a senior official, Geoffrey Krazinski, to Russia. The plot quickens when he is murdered but the death is reported as accidental.


Back in Canada Saint is shocked by the news and convinces, actually coerces, his superiors to let him to go to Russia. On Saint’s arrival he finds General-polkovnik Develchko demanding he be satisfied with a quick look around and then return to Canada.


The stubborn Saint is not a man to be brushed aside. He is gathering information when suddenly attacked.  He persists and reaches the crash site but finds it sanitized and returns to Canada


Back in Canada Saint, unhappy with the direction of the Agency and having received dire medical news resigns and heads home to the family farm just south of Saskatoon.


Up to this point in the story Anthony has been writing a rather conventional thriller with a classically self-centred hero.


Saint is much too conscious of his appearance and possessions. Every item he owns must carry a prestigious brand name. When I heard Anthony speak of the book last year this was not the hero in my mind. How can this shallow man be from Saskatchewan? Saint reminded me of such cardboard heroes as Dr. Jonathan Ransom in Rules of Betrayal by Christopher Reichs. Had Anthony decided to go for a Hollywood style bestseller?


When Saint returns to Saskatchewan he shifts from the international agent to the prodigal farm son. He sheds his brand name apparel for work wear and starts helping his Dad out on the farm.


He is startled to find his 19year old nephew, Anatole, lives with his grandfather while carrying on a home based worldwide computer business.


Almost as surprising to Saint is that his younger sister, Alexandra, with a self-destructive life history is turning herself into a business woman even if her venture into capitalism is a low class bar.


Saint assesses his life and future back on the farm. Because of his personality and experiences he will not  take over the family farm. At the same time he recognizes his fixation on career has left his family relationships in tatters. For Saskatchewan, he has returned so rarely they barely know him and, in Ontario, his wife is divorcing him and his son is distant.


Trying not to spoil the story by going into details I will say Saint is drawn into a quest that involves the CDRA. The journey requires some suspension of disbelief. At one point I thought Anthony was asking too much suspension but the story remains credible.


The Saint of the second half is the hero I expect from Saskatchewan. While never humble he is more modest and self-effacing and far from the Hollywood hero.


I was glad the story did not stay in Russia, Ontario and other distant locations. It would have been too much the generic thriller. The key setting is Saskatchewan and Anthony does a good job of evoking life on the farm.


Saint is a new form of agent. I do not know any other fictional disaster recovery agents. It does allow Anthony to incorporate almost any location into the plot.


It is a good book. I think the next in the series will be better as Anthony develops Saint as a character and gets more accustomed to the thriller genre. When the Saints Go Marching In is far different from the mysteries of Russell Quant. 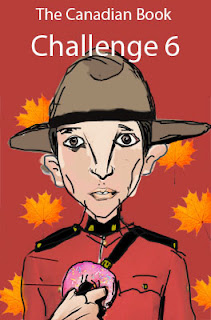 Anthony is getting more recognition as a writer. When I returned to Toronto from our cruise there was on prominent display in the airport bookstore copies of When the Saints Go Marching In.


I appreciate Anthony providing me with a copy of the book. (June 20/13)
****
When the Saints Go Marching In is the 12th book of 13 I have read in the 6th Canadian Book Challenge hosted by John Mutford at the Book Mine Set blog.