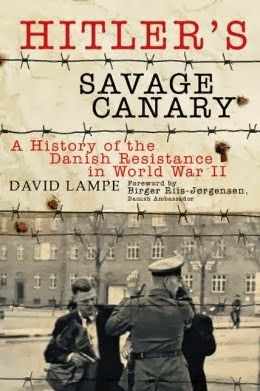 18. – 765.) Hitler’s Savage Canary by David Lampe (1957) – The book is not a conventional chronological history of the Danish Resistance during WW II. Lampe writes about a subject or theme in each chapter.


In the opening chapter titled “Paper Bullets” he discusses a form of Resistance far from the traditional images of bombs and bullets. Through the Occupation there were underground newspapers published across Denmark. A secret news service, Information, was established that put out frequent bulletins, 575 in all, that were sent out to “eighteen illegal newspapers all over Denmark”.


There is a chapter on the rescue of Torben Ørum, a Danish Air Force Lieutenant-Colonel, rightly considered by the Germans to have set up a spy network. He is sentenced to a lengthy term in jail. Unhappy that Denmark did not have capital punishment the German authorities were planning to take him back to Germany where he will be executed. A Danish Resistance group carried out a clever scheme to save him. While Ørum is in the Copenhagen Military Hospital members of the group overpower his guards. After disguising Ørum they plan to walk out of the hospital. As they near the entrance another member of the Resistance creates a distraction by dropping a bottle of pills. Wearing the cap of a Customs Officer Ørum greets a Gestapo man on the docks and walks on to a Customs cruiser that takes him to safety in Sweden.


There is a fascinating chapter on how a group of doctors were instrumental in helping Danish Jews flee Denmark for Sweden. To assist in the costs of the program they solicited donations from businesses and wealthy individuals that eventually totalled over 1,000,000 kroner. Jewish men, women and children were gathered in hospitals and transported by the Red Cross and sent to Sweden on small boats. They succeeded in helping about 2,000 of the 7,200 Danish Jews reach Sweden. The doctors did not have a single person lost during their transport operations.


I had not known that the Danes kept track of the 570 Jews who were captured and sent to the Theresienstadt concentration camp. Discovering they could send food and clothing parcels to them a secret government fund was used for Danish government officals to send parcels to individual Danish Jews in the camps. The book states only about 50 Danish Jews of the 570 died in the camp.


Yet another chapter sets out how the Danes dealt with secret radios. They had been sent radios by the English that were bulky and not operating on the electrical current used in Denmark. Arne Duus-Hansen, an engineer at Bang og Olufsen, invented a radio “smaller than a London telephone directory, worked on both alternating and direct current, used valves that could be replaced with those in almost any Danish home wireless, transmitted on all the frequencies assigned to the Danish Resistance, weighed only three pounds, and had twice the power output of the British-built transmitters”.


It is a book about the accomplishments of the Danish Resistance rather than a critical look at the Resistance. It spends little time on the issue that the Resistance did little to directly confront the German occupiers until three years into the Occupation in 1943.


In visiting the Danish Resistance Museum in Copenhagen I saw challenging exhibits on how much Denmark co-operated or colloborated with the Germans for those 3 years. The word “collaboration” is so emotionally charged.


Mark Mazower, in Hitler’s Empire, recognizes there were reasons why a more violent Resistance did not take place in Western Europe. While wanting to limit casualities in occupied countries the British, for political reasons, did not want large Resistance organizations that could challenge the exile governments that had been established in England. As well, the harsh reprisals of the Germans to Resistance actions in France discouraged the Resistance in other countries.


Hitler’s Savage Canary is an interesting and informative book.
Posted by Bill Selnes at 11:38 PM