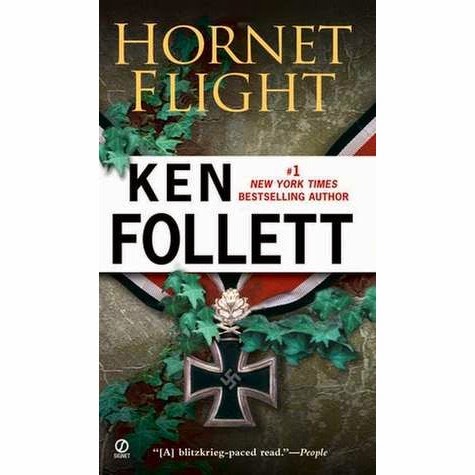 Hornet Flight by Ken Follett (2002) – Last Christmas my son Michael, who had just returned from a semester of law school at the University of Copenhagen on exchange from the University of Calgary, knowing my long term interest in WW II gave me this book and Hitler’s Savage Canary by David Lampe as Christmas presents. I have now completed both books.


In this post will be my review of Hornet Flight. I will follow up with a post reviewing Hitler’s Savage Canary. I will go on with a post about the fictional flight and a real life flight from Denmark to England. I will close the quartet of posts with a post on a series of comments regular commenter, Kathy D., and I exchanged some time ago concerning the Resistance in WW II occupied Europe.


Hornet Flight opens in the spring of 1941. England has survived the Blitz and is looking to hit back at Germany with its only offensive weapon – heavy bombers – but the bombing campaign is not going well because the Nazis appear to be able to electronically track the bombers. While the English do not believe the Germans are ahead of them in the development of radar they do not know how the bombers are being targeted. With losses mounting to unsustainable levels Churchill orders British intelligence to find out how the Germans are finding the bombers.


In Denmark the population is adjusting to life under their German occupiers. Most are going about their lives as they did before Germany took over the country. Some have joined a Resistance movement which is gradually becoming organized. Others are Danish Nazis.


Harald Olufsen is a high school student who has grown up on the island of Sande just off the west coast of Denmark near Morelunde. His father, Bruno, is the pastor of the island church. His congregation has moved from Evangelical Lutheranism to a more “uncompromising puritanism”. Harald’s older brother, Arne, is a flying instructor in the Danish Army Aviation Troops. With his love of jazz Arne is drifting away his father’s religion.


Arne is engaged to Hermia Mount. She is English and spent several years in Denmark before the war. Now in England she is in British Intelligence. She has set up the Nightwatchmen, one of the first Resistance networks in Denmark. Uneasy that Arne’s gregarious personality is unsuited to intelligence work she has not recruited him.


After learning of Churchill’s directive Mount seeks to assist in determining how the Germans are locating the bombers.


Karen Duchwitz is a lovely young Jewish ballet student. Her wealthy banker father still has his businesses and estate. She knows Harald and Arne through her brother.


Copenhagen police officer, Peter Flemming, has also grown up on Sande. A dedicated and ambitious officer he is not a Nazi but sees the way to advance during the war is to be of service to the Germans.


When word reaches him that a flight to Sweden will contain a package with secret information he acts swiftly to intercept the flight. What he finds sets off a complex interaction between the characters as the British seek the Nazi secret and Flemming diligently pursues members of the Resistance as he considers them criminals.


While the book is over 500 pages Follett keeps up the pace of the plot. I never dragged in the reading of the book and enjoyed the characters. They are better developed than in many thrillers.


It is a thriller that does not have the book littered with bodies. While there is not a heavy body count Follett, in his usual style, has characters die that most thriller writers would not kill off.


I appreciated the fictional look into life in Denmark during the Occupation. It is a very good thriller that does not strain the reader’s credibility.


As with every book I read about European Resistance I wonder what I would have done had I been lived in Occupied Europe during WW II.
Posted by Bill Selnes at 10:50 PM