The Armand Gamache Series after 10 Mysteries (Part I) 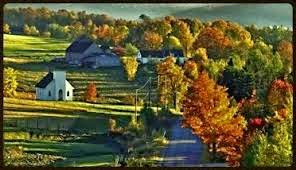 The Long Way Home by Louise Penny is the 10th book in the Armand Gamache series. It has been one of my favourite mystery series since I read the first book, Still Life, in December of 2005. In this post and my next post I will discuss the series. This post will be about setting and characters. The next post will discuss plots.


I was captured in the first book by the postcard perfect village of Three Pines in the Eastern Townships of Quebec. In Three Pines Penny created a setting for the series that is beautiful and memorable. Any mystery reader who has read the series need only hear the words Three Pines to instantly recall the captivating community.


I like that the houses are individual. There is none of the current Canadian mania for identical houses in identical colours block after block.


Books have been set in the village in every season. Weather affects villages more than cities. In Canada it can mean coping with the weather in winter. Three Pines is inviting all four seasons of the year.


Penny peopled the village with memorable characters. Clara and Peter Morrow are artists with a challenging marriage. Ruth Zardo is an elderly poet who has won a Canadian Governor General’s Award for her poetry (one of the top literary awards in Canada) and has the sharpest tongue in town. Myrna Landers is a large lesbian woman who is a retired psychologist running a used bookstore. Gabri and Olivier are a gay couple who jointly own a bistro and a B & B.


Of the group Clara, who Penny has acknowledged is patterned after the author, has transformed herself from a struggling artist, very much the passive member of a marriage, to an independent woman with world recognition of her talent.


As the series has progressed I look forward to the interaction between the village residents. They are interesting people who occasionally challenge a reader. You wish you could join them at the bistro for a glass of wine and some nuts for snacking sitting before the crackling fireplace.


Armand Gamache is a skilled investigator who has risen to be Chief Inspector of Homicide for the Quebec Surete. While some find him too perfect I have appreciated that he is a thoughtful man who works his way through investigations. Penny has described him as the man she would want to marry saying that, with the amount of time she as an author would spend with her sleuth, that she wanted a man who could be her spouse.


Best of all Gamache has a loving wife, Reine Marie, who has a good job, librarian, and two adult children with whom he has a good relationship. I think it is just as challenging to create a sleuth who has a normal lifestyle as the lonely angst ridden characters favoured in many series.


On his team Jean Guy Beauvoir is his earnest dedicated subordinate. His personal life has not gone well in the early books but he, once again rare in mysteries, finds love later in the series.


For a time Gamache and Beauvoir had a strained relationship over a disastrous incident involving Canadian born terrorists. I did not really understand the estrangement but was glad to see them resolve their issues.


Detective Yvette Nichols was a jarring discordant presence on Gamache’s team. She challenged him and irritated the other detectives. The result was a memorable, if annoying, character.


Gamache and Reine Marie are comfortable with their ages and look forward to their time together after retirement. With the series continuing after they have retired to Three Pines new story opportunities will arise.


I appreciate that the setting is not some generic North American place with equally generic people. Three Pines is clearly set in rural Quebec and I recognize the characters as Canadians.
Posted by Bill Selnes at 10:59 PM