By Book or By Crook by Eva Gates 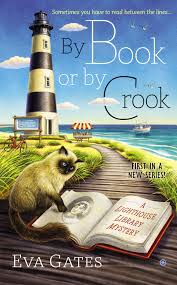 By Book or By Crook by Eva Gates – The author is actually Canadian author, Vicki Delany, writing a new series, The Lighthouse Library Mysteries, under the name of Eva Gates. The cozy series is set in the Bodie Island Lighthouse Library on the Outer Banks of North Carolina.


Lucy Richardson, a professionally trained librarian has been working at Harvard. She has achieved a credible education and a suitable job. She has a stifling life in Boston. Her well-to-do family led by her formidable mother has mapped out her life. Family friend, Richard Eric Lewiston III, known as Ricky, an associate in the law firm in which her father and his father are partners, has been designated her spouse-to-be in a modern form of arranged marriage. She has glided into her 30’s vaguely dissatisfied but hardly rebellious. Then Ricky proposes. Unwilling to be “trapped into a life of social expectations” Lucy rejects Ricky and decides to change her life.


She resigns her job and heads south to the Outer Banks to spend some time with Aunt Ellen and Uncle Amos. Shortly after arrival she is offered the position of assistant librarian at the Bodie Island Lighthouse Library and the chance to live in the small apartment located on the 4th floor of the lighthouse. She is glad to accept.
The library is in a whirl as she arrives as an exhibit of first editions of Jane Austen’s six books is about to open. Lucy describes holding the 1811edition of Sense and Sensibility


I closed my eyes again and breathed. The scent was of old paper and aging leather, carrying with it memories of the foggy streets of London, the sound of horse’s hooves rattling across the cobblestones, the gentle rustle of skirts and petticoats, and the cackle of fire.


The night before the opening of the exhibit the staff, Library board and local dignitaries gather at the Library to celebrate. Wine and beer are flowing freely and emotions are clashing. Marital discord and local rivalries within the library are unleashed.


Lucy is pleasantly diverted by Mayor Connor McNeil and Officer Butch Greenblatt. The handsome Mayor had been the first boy a teenage Lucy had kissed. The equally good looking Greenblatt invites Lucy to supper.


A scream suspends the festivities. Library Board Chair, Jonathan Uppiton, has been found dead in the rare books room beside the Austen exhibit.


Suspicion falls upon the Head Librarian, Bertie, who had a nasty exchange with Uppiton just before he was killed.


Still actual evidence is sparse and anyone from the party could have slipped upstairs and killed Uppiton.


Lucy is permitted to stay in her small apartment while the investigation continues into the murder. She brings Charles, the Library’s Himalayan cat, up to stay with her.


The exhibit opens the next day and is a great success despite the murder. Local and distant lovers of Jane Austen flock to the library.


Lucy starts giving lectures about Austen to sell out audiences. Bertie reassures Lucy that she need not have in depth knowledge of Austen’s life and work. She realizes Bertie is correct after answering several queries on where Austen lived in North Carolina.


The Library’s world is turned upside down again when Sense and Sensibility is stolen. Already in jeopardy Bertie’s future is even more uncertain.


While Lucy’s dinner with Butch is canceled the Mayor invites her out. Personally Lucy dresses carefully for her date with the Mayor:


It was unadorned, cut without much shape, but made of excellent linen. If I wore it with the black leather belt that had come with the yellow dress, it would give me some much-needed curves. But stark black seemed so ….. Boston. I eyed a three-quarter-sleeved yellow sweater, cropped at the waist that I’d bought for something to throw on over shorts if a summer evening turned cool. The sweater would give the outfit a pop of color.


Though ghost stories abound about the Lighthouse Lucy is determined to stay and clear Bertie.


The book flows smoothly. It is an interesting mystery and a fascinating setting. The mix of history and sea and shore has me wanting to visit the Outer Banks. It is an excellent cozy. As I know little more about Jane Austen beyond she never lived in North Carolina I cannot comment on the Austen element. I expect readers who love Austen would find the book even more enjoyable. The book will be released on February 3, 2015.
Posted by Bill Selnes at 12:55 AM