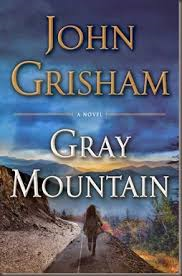 Gray Mountain by John Grisham – My annual Grisham legal mystery flowed just as smoothly as the previous 21 books. I started the book Friday morning and was done Sunday evening. The book is a variation on a theme Grisham has used in other books. A lawyer in a big city big time law firm leaves the soulless mega firm for a different life in the law.


Unlike many of his contemporary mysteries Grisham goes back to 2008 for Gray Mountain. After a privileged upbringing in Washington D.C., Samantha Kofer has been diligently toiling away in New York City in corporate real estate for Scully and Pershing, the world’s largest law firm with 2,000 lawyers in various offices around the globe.


After 3 years of hard work - she billed 3,000 hours in her previous year - she has a financially comfortable lifestyle, chronic sleep deprivation and six souvenir models of skyscraper projects upon which she has worked.


However, the financial meltdown after the collapse of the sub-prime mortgage market has left the huge firms in chaos as major clients collapse and the flow of money becomes a trickle. With little future work and uncertainty whether the world is in recession or depression drastic cuts are made.


At Scully and Pershing Samantha (Sam to her parents and close friends, Samantha at work and Sammie to no one) is furloughed for a year. She will receive no pay for 12 months though her health benefits will continue and, if she works for a non-profit rather than with a private law firm, she will be re-hired if economic circumstances are more favourable.


Turned down by 10 non-profits who have a surplus of New York lawyers applying for positions Samantha travels to the small town of Brady, Virginia for an interview with the Mountain Legal Aid Clinic.


Deep in the mountains of Appalachia the Mountain Clinic is an unconventional legal aid office in that it handles no criminal law. Privately and modestly funded it provides free representation for the poor in a variety of areas of civil law.


Big City Sam is alternately charmed and appalled by Brady and its inhabitants. She accepts, maybe even likes, being called Miss Sam but she is depressed by the deep and pervasive poverty.


Coal dominates the economy. The former underground mining has been replaced by surface mining, a euphemism for slicing the tops of mountains to extract the coal. The massive amounts of waste soil and rock are dumped into the surrounding valleys.


Black lung disease, formerly associated with underground mining, is surging as miners breathe in coal dust from the mining and the washing and the transportation of the coal. Safety regulations mean little to the big coal companies.


Sam meets Donovan Gray, a charismatic trial lawyer tilting at the coal companies in 5 different states for their dangerous practices. He is also young, handsome, charming and separated. Donovan is an aggressive trial lawyer with a handgun mounted on his dashboard as he is followed by the thugs of Big Coal.


At the Clinic Sam is swiftly caught up in the challenges faced by the poor, especially in economically depressed areas.


Phoebe Fanning has been beaten by her husband, player in the local meth industry and a heavy user of crystal meth. Fearful for her life a restraining order is sought. Sam joins Annette Brevard from the clinic in court fighting to protect Phoebe.


Mrs. Francine Clump, 80 and ailing, asks for a new will as she does not want her children, who care little for her, to have her 80 acres. She does not want the land sold to Big Coal and then ravaged.


Pamela Booker has been fired because of the bookkeeping hassle to her employer from Pamela being garnisheed for a credit card debt she did not realize still existed. She is living out of her car with her two young children.


Sam finds life on the front lines of human legal representation more intriguing than the dull days and nights of document review high above the streets and people of Manhattan.


It is an interesting, not great Grisham book, until ……….. To say more would spoil the book. I did not see the twist coming. Grisham does not often insert a dramatic change. It works brilliantly in Gray Mountain.


Big coal and poor people make for uneven fights unless the poor have a good lawyer. Does Sam want to join the fight?
Posted by Bill Selnes at 9:47 PM