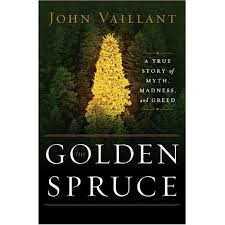 The giant trees of the West Coast are the defining feature of Haida Gwaii. In Silver Totem of Shame, the author, R.J. Harlick provides a vivid description:


This was my first up-close look at Haida Gwaii’s famed rainforests and I was overwhelmed. Since old growth white pine grow on Three Deer Point, I was used to the size of tree Mother Earth can produce when left to her own devices, but never in my wanderings in the forests of Eastern Canada had I encountered such monsters. With diameters in excess of five to seven meters, the heights of these red cedars were in back arching territory seventy to eighty meters. According to Becky, these were babies, only a few hundred years old. The six or seven-hundred-year grandmothers were twice the size, but were only found in the inaccessible reaches of the archipelago where loggers had never tread.


For centuries a special Sitka Spruce was honoured by the Haida. It was also of great interest to the white people of the West Coast. The story of the Golden Spruce shall wind up my series of posts involving the Haida of British Columbia  and the mystery, Silver Totem of Shame:


31. - 397.) The Golden Spruce by John Vallant – In the Queen Charlotte Islands a golden spruce tree started growing about 1700. Its needles were a luminous gold rather than green. In Haida mythology a small boy fleeing disaster with his grandfather looked back after he was told to only look ahead and was turned into the tree. The book explores how the giant trees of the grow over the centuries. In the last century the vast old growth forests of B.C. have been cut down. Grant Hadwin, a classic loner, worked in the logging industry. Like many loggers he loved nature. His life is transformed when he has a vision – a mystical calling from the Divine if he had been religious. He militantly turns against the logging industry. In a shocking self-indulgent protest against the logging industry he cuts down the Golden Spruce. He succeeds only in uniting the world against him. Hadwin disappears while on a quixotic sea kayak journey from to the Queen Charlottes in mid-winter to attend court. It was fascinating to read the attempts made to save the legacy of the Golden Spruce by clone or graft. The results are yet uncertain. I read the book in 2 days. The book provides insight into the life changing experiences of those called by God and feel compelled to respond. (Aug. 8/07) (Best non-fiction of 2007)

A walking trail, the Golden Spruce Trail, was established in the area the tree had grown. More information on the trail  is available at http://www.gohaidagwaii.ca/blog/the-golden-spruce-trail-port-clements.


While the Golden Spruce was felled in 1997 efforts, as set out in my review above, were made to have the tree live again. A
Vancouver Sun newspaper article 2012 sets out how cuttings taken from the tree before and after it was cut down have fared. With regard to cuttings from after the tree went down the article states:


After the original tree came down, the top was sent to the Cowichan Lake Research Station. About 100 cuttings were grafted onto Sitka spruce samples and of those, 60 survived, said station manager Mark Griffin. Twenty have been planted on the property, after spending years in a greenhouse.


Some of the cuttings were given to the Haida Nation.
One was planted in Port Clements, about 10 kilometers from where the original tree stood. The photo below is of that tree. I pray that the tree thrives and grows and future generations can appreciate the majesty of the Golden Spruce. 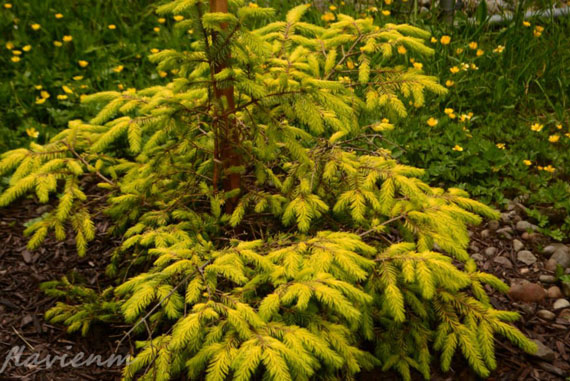