The Burning Room by Michael Connelly 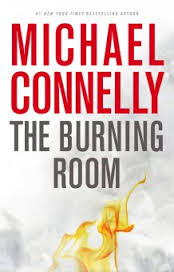 7. – 804.) The Burning Room by Michael Connelly – Harry Bosch has a new partner, Lucia Soto, better known as Lucky Lucy in the L.A. Police Department after killing two armed robbers in a shootout in which her partner was killed. Lucy, at 28, with less than 5 years on the force has been been made a member of the elite Open-Unsolved Unit as part of an administrative decision to bring fresh thinking young officers into the special Units of the Department. Senior detectives call them the “Mod Squad”. (While intended as a derogatory term I doubt many of the young officers have even heard of the 1960’s T.V. series of hip young detectives by that name.) Lucy has to convince Harry that she is up to his investigative standards.

It is a brilliant premise that maintains Connelly’s elite status as a writer of crime fiction.

When the bullet is extracted during a rather gruesome autopsy the police are startled to learn it is a rifle bullet. It is confounding information. The whole original investigation had been based on the assumption that Merced, a musician in a mariachi band, had been shot by a member of the local Latino street gang known as the White Fence. While never confirmed it was thought the shooting was a form of gang intimidation.

Adding to the puzzle it is a bullet which was fired from a hunting rifle. Why would such a gun be in downtown L.A.?

While Harry, like many of his generation (my generation) is not really current with all the electronic devices, he is fully aware of advances in police technology. New science is at the heart of the Open-Unsolved Unit.

With a rifle bullet all assumptions on where the gun was fired must also be re-examined. Where a trajectory kit would have been used by Harry as a young officer the trajectory is now turned over to a specialized police department that, using computers, not only computes the angle of the bullet but provide multi-angle animation of the shot. Harry and Lucy are provided with a vivid recreation of the shooting.

Harry is wary of local politician, Armando Zeyas, who had used the shooting a decade ago to help his successful campaign to become mayor. Now, through doubling a reward, he is looking to leverage the murder for his plan to become governor. How he personally irritates Harry will be my next post.

While Harry is solely focused on the shooting he finds that Lucy has been quietly looking into a 21 year old case. Smoke from a fire in a residential complex killed 9 Latin American children. Harry’s annoyance over her divided attention ends when she tells him she was a survivor of the fire. On her arm are tattooed the names of 5 of the children who were her friends.

Harry gradually realizes Lucy is a lot like the young Harry. She burns inside to solve murders. The number of hours at work mean little to her. She will not rest. She arrives early and leaves late. Whether you consider her obsessed or committed she is completely dedicated.

In the fire case Connelly draws upon a real life L.A. shootout that further illustrates his talent at taking an event and letting it inspire a new story.

Harry continues to want to be a good father to Maddie who is now 17. He cares about her. He watches over her. He is a touch over protective (Every boyfriend must be told he is a police officer. He wants teenage boyfriends to know he is a man who carries a gun.) However, all the time spent on the job means he must basically schedule time with Maddie. The book made me long for him to spend more time with her for she will soon be gone to university.

Part of Harry’s conflict with time is that he is in the last year being a detective. His extended career through the DROP program is near expiration. Harry’s love of police work is driving him to spend all the time he can solving cases. Early in the book:

To him, every day he had left on the job was golden. The hours were like diamonds - as valuable as anything on earth. He thought that it might be a good way to finish things, training an inexperienced detective and passing on whatever it was he had to pass on.