Split to Splinters by Max Everhart 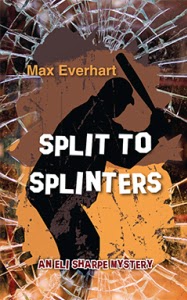 11. - 808.) Split to Splinters by Max Everhart – All private investigator Eli Sharpe has to do to be hired is get a hit off 58 year old Jim Honeycutt pitching to him. It should be easy. Eli is in his mid-30's, in good shape and briefly played in the major leagues. However, the pitcher is a Hall of Famer, nicknamed the “Texas Terror”, who can still bring the heat with his fastball edging 90 mph. Eli cracks a hit up the middle and is hired.


Honeycutt, a very successful real estate developer, in Asheville, North Carolina retains Eli to recover the baseball Honeycutt had retained and autographed from his 300th major league win. The ball had been stolen from Honeycutt’s desk in his home office.


Beyond its personal significance to Honeycutt the ball is worth at least $100,000 to collectors of baseball memorabilia. My next post will discuss the extraordinary values of North American sports souvenirs.


Clearly the leading suspects are members of Honeycutt’s family and Earl Boykins, an aging alcoholic sportswriter, who is living in the basement while assisting Honeycutt in writing an autobiography.


Honeycutt’s wife, Tess, and his daughters (Maggie, April, Robin and Heather) and Boykins all could have stolen the ball. As well, Tess’s friend, Linda Rogers, could have taken the ball.


Left behind is an enigmatic note:


LOOK AT DAUGHTERS, FIND YOUR BALL


All the women, including teenage Heather, are attractive. Several are gorgeous. Having had 5 fiancees, though never married, Eli appreciates their beauty.


Tess and the daughters all have reason to resent Honeycutt. He is overbearing and while he has spoiled them by freely indulging them he has never given them authority or financial freedom. Most recently, upset with assorted family members, he has revised his will. Each of the women has reason to be concerned about their future if Honeycutt should die.


Eli has little sympathy with the pampered quintet. His drug abusing and thieving parents had dragged him around America as a child dropping him off at a series of public libraries while they went about their criminal ventures:


He didn’t attend school for the first thirteen years of his life, so Eli taught himself to read and loved sitting Indian-style in the fiction stacks with his best friends – Ryamond Chandler and Dashiel Hammett. Ross MacDonald and Elmore Leonard.


In his eulogy for his mother Eli said:


“Lynette Sharp, or Moonbeam when she was traveling, was a bad mom, but a good thief, and despite her catalogue of faults, I loved her.”


Eli's investigation takes him into the private lives of the Honeycutts, Boykins and Rogers. Each has major personal issues. All but Rogers have clear grudges against Honeycutt. The case is difficult as all have opportunity and motive.


The personal lives of the Honeycutt clan are troubled but not sordid. Eli can understand their personal emotional challenges and appreciate why they are not in counseling. He explains why he stopped seeing a counselor:


Besides, you only talk about yourself in therapy, and he didn’t want to know himself any better than he already did.


Split to Splinters is not a great mystery but Eli is a great character and Everhart has filled the book with interesting people. I like spending time with Eli. I was glad his personal issues played a lesser role in this book. It helps that baseball is a game I love and each mystery has a baseball theme.


The first book of the series Go Go Gato explored the troubled life of a young Cuban defector signed to his first professional contract. Split to Splinters is about one of the game’s greatest players who has been retired for over a decade. I wonder if the third will be about active professional ballplayers in the prime of their careers.


You need not know baseball to enjoy the book but there are nuances for those who know the game. A good series is underway. (Mar. 15/15)
****
Posted by Bill Selnes at 8:37 PM