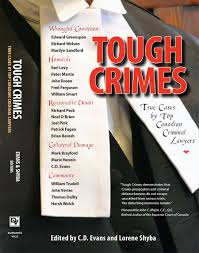 12. - 809.) Tough Crimes edited by C.D. Evans and Lorene Shyba – C.D., who has practised criminal law in Calgary for over 40 years, and Lorene, a writer / editor / researcher, have assembled a collection of “true cases by top Canadian criminal lawyers”. They approached the lawyers requesting they write about a case that was “perplexing or disquieting, had weird or surprising turns, or presented personal and ethical issues”. Each of the stories sets out the personal recollections of a lawyer about a memorable case in which they appeared.


The book is divided into groups of cases on a theme. The headings are wrongful conviction, homicide, reasonable doubt, collateral damage and community.


The cases are all from my contemporaries who have practised law during the past 39 years I have been a lawyer. I know almost all of the lawyers by reputation. Two I personally know well. One, Brian Beresh, was a classmate with me at the University of Saskatchewan and another, Mark Brayford, is a colleague in Saskatchewan. My next post will focus on the stories they wrote for the book.


What makes the collection unique is that readers get a chance to read how lawyers thought and reacted to memorable cases that span our far flung nation.


Readers accustomed to legal mysteries in which the featured lawyer, whether prosecutor or defender, wins the case will be surprised that several of the cases chosen were cases lost by the lawyer.


The most notorious case discussed was the Paul Bernardo murder trial. Bernardo and his wife, Karla Homolka, killed a pair of teenage Ontario girls and their sexual assault of Homolka’s sister ended with the sister’s death. Bernardo was also identified as the Scarborough rapist. He had committed a series of rapes in the Toronto suburb before turning to murder with Homolka.
﻿﻿

John Rosen acted for Bernardo with regard to the murder charges. In his opening paragraph he says:
﻿﻿“….. what makes Bernardo and Homolka so infamous is that, outwardly, they appeared entirely normal. As a young, attractive, seemingly normal, white and upwardly mobile couple, they appeared to represent everything middle class Canadian society strives to be. But when his crimes came to light, to the general public Bernardo became the Devil Incarnate. Does that make me, his trial lawyer, the Devil’s advocate?”﻿﻿﻿﻿﻿﻿﻿﻿

﻿Rosen is a good story teller. Effective trial lawyers must have that skill. To hold the attention of juries and convince judges you have to tell the story of your client well.
﻿﻿

As he took over the defence from Bernardo’s first lawyer Rosen was provided with videotapes that police searches had never found in the Bernardo home. The tapes showed the teenage girls being sexually and physically abused and raped.


Rosen discusses his reaction to the tapes:


In truth though, the images depicted shook me to the core. At one point I needed to stop and excuse myself for a few moments. The images were deeply disturbing and the implications were obvious. How was I going to defend this case in the face of these tapes? What would prevent the jury from coming over the boards at me for having the gall to advance any defence for this accused? Moreover, I am a father myself – what would my own family think of me? How was I going to survive a trial with my health and reputation intact? …… After a moment’s hesitation, I decided to put aside my personal feelings and interests and get on with the job at hand.


Another showed a defence lawyer, John Vertes, working with the Crown prosecutor and the judge to adopt a special approach in the Arctic in the late 1970’s to achieve a just result. His 18 year old Inuit client, Henry Suviserk Innuksuk, was guilty of setting several fires in his small community on the distant northwestern shore of Hudson’s Bay. At the same time Henry was severely mentally challenged. No one thought sending him away to jail would be good for Henry but a punishment was needed.


When Vertes arrived for court there was a special meeting:


Upon arrival, I immediately went to the Hamlet office where I was greeted by a large throng of people including the mayor and the Council members, all of whom were Inuit except for one. Also in attendance were Dr. and Mr. Williamson; Henry’s elderly father, two of his older brothers, as well as many community members. One by one, they spoke to me about Inuit traditional ways and about their concerns for Henry. The mayor said that he and every member of the Hamlet Council would be willing to act as surety and supervise Henry in the community if that would mean Henry’s avoidance of a jail term. They felt sad that they had not paid more attention to Henry in the community, previously knowing his limitations. And now they wanted to take responsibility for his future conduct.


It is a great book. I freely admit to a large bias. As a part of my practice I have been defending men and women in the criminal courts of Canada throughout my legal career. These stories resonate deeply with me. I can assure readers they are “real”.


I believe the book would be invaluable to any writer of crime fiction intending to write about a Canadian criminal trial. There are 20 powerful cases to inspire plots. There are an equal number of vivid lawyers whose personalities and approaches to criminal law can be drawn upon in creating characters. I would extend the worth of the book to anyone writing about lawyers and criminal cases in any of the countries whose criminal justice is based on the principles of Anglo / American justice.


I think every young Canadian lawyer should read this book and will be encouraging my sons and my articling students to read and reflect on Tough Crimes. You will not think of criminal lawyers in the same way after reading this book.
Posted by Bill Selnes at 11:33 PM