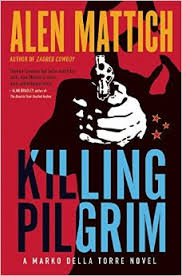 (21. - 818) Killing Pilgrim by Alen Mattich – (DDB) I was grabbed in the opening chapter. The Montenegrin, top assassin in the Yugoslav Secret Service, is in Stockholm in February of 1986. He is on a solo mission to kill “Pilgrim”. It has something to do with Swedish centrifuges sold to Belgrade and then sold on by the Yugoslav government. Patiently stalking his quarry the Montenegrin finds him unguarded on a winter night and kills Pilgrim on a quiet Swedish street. He has assassinated Olaf Palme, the Prime Minister of Sweden.


Five years later Yugoslavia is breaking down. Slovenia has already broken away. Croatia has declared independence. Serbia is clinging to the concept of Yugoslavia. Serbian and Croatian nationalists are arming and forming militias.


Western Canadian pizza magnate, Zlatko Horvat, has returned to his native Croatia where he forms an ultra-nationalist militia and is profitably smuggling arms into Croatia. Abruptly he is made Deputy Minister of Defence.


With Yugoslavia collapsing Marko della Torre is in administrative limbo. Formerly a member of the UDSB, the national secret service, his Zagreb unit is being assigned to Croatian Military Intelligence.


Della Torre is better known within the Secret Service as “Gringo”. He spent several years of his youth in America where his father was a professor for a time.


Della Torre is still recovering from a bullet wound sustained when Bosnian killers tried to kill him in Zagreb Cowboy (a book I am going to have to read).


To gain some money he sold some UDSB files. One is the Pilgrim file. While the documents of the Pilgrim file are sketchy and do not reveal the name of the target the sale of the file created alarm.


Della Torre, while the new Army bureaucracy tries to find a role for him, is sent on some meaningless fact finding assignments.


On a visit to his father he meets a stunning American researcher, Rebecca Vees, who is researching “the development of the Glagolitic alphabet” (the research involves Slavonic languages.)


A short time later his world is jolted when Rebecca turns out to be a highly skilled American intelligence agent. It is never clear which agency employs her. Not the least of her weapons is her beauty and sensuality.


Croatia is desperate to find international friends and none would be better than the United States. If Croatia can help America it will do anything to please the U.S.


While it is not clear why America wants the Montenegrin, Della Torre is directed to help the American agents.


There is the same pervasive tension of Alan Furst’s pre-World War II books. Nations are preparing for war and intelligence agencies have urgent instructions. What the spies do can have great consequences in the looming conflict.


Della Torre is caught between a pair of killers. He knows the Montenegrin, a vicious retired killer though well connected and well protected. He is accompanying Rebecca, an amoral killer herself.


Rebecca is a predecessor to the American intelligence agents who, after 9/11, ranged the world wreaking vengeance on America’s enemies.


It is a complex thriller which is a rarity in my recent reading experience. Della Torre is living in dangerous times. Readers cannot help thinking of the devastation about to be unleashed in the Balkans. The plot is subtle darkness.


Killing Pilgrim is well worthy of being on the shortlist for the 2015 Arthur Ellis Award for Best Canadian crime novel.
Posted by Bill Selnes at 11:39 PM