The Girl in the Spider’s Web by David Lagercrantz 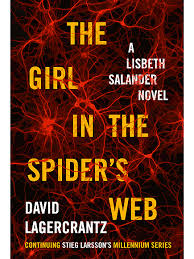 The Girl in the Spider’s Web by David Lagercrantz – The fourth book in the Lisbeth Salander / Mikael Blomkvist saga could have been a great book.


A pair of brilliant new characters are introduced. Frans Balder is a Swedish computer genius who has recently returned to Sweden from the United States with a computer full of research on his breakthroughs in artificial intelligence. He has come back to care for his young son, August, who has major developmental issues.


Once August is in his custody Balder sees, to his astonishment, that the 8 year old August can produce drawings of events that are startling in their precision and accuracy. He also appears to have a genius level talent with numbers.


There is a convincing evil organization, the Spider Society, with Russian criminals at its core. Their successful efforts at stealing leading computer technology are a real threat to the world. Their connections with America’s NSA (National Security Agency) is truly frightening.


Balder had originally left Sweden over issues of industrial espionage and theft of his research and had been in contact with Lisbeth.


Lisbeth is back in hacking glory. She has been lured by the Hacker Republic into launching a cyber-assault on the NSA. Using all of her hacking skills she penetrates to the heart of the NSA. It does not read like a fantasy.


Blomkvist is in a funk having not been involved a major investigative reporting story for some time. He is stagnating.


Yet it did not all come together for me.


Balder’s death took one of the two most interesting characters out of the book.


The mythic figure of “Thanos” leading the Spider Society felt contrived. With the identity of numerous members known it was hard to believe there was a secret leader.


Lisbeth becomes an almost conventional heroine in saving August from harm. Lisbeth has never been conventional. She verges on the maternal in her relationship with August.


Her ability to carry out despite multiple serious injuries was too much the comic book hero of many contemporary thrillers.


It is a rather clumsy scenario when a young associate of Balder, Linus Brandell, contacts Blomkvist to convince him that Balder is the next great “scoop” for Millennium.


The introduction of a new family antagonist for Lisbeth was my least favourite plot line and could have been omitted without damaging the story.


The best part of the book was August’s relationship with Lisbeth. Neither mind operates well in our world. Their capacities leave them ill-equipped to function well in modern society. August, who may have Savant Syndrome, is on the verge of being institutionalized.


Unlike the Supergun of Louise Penny’s most recent book, The Nature of the Beast, the technologies at risk of theft in The Girl in the Spider’s Web are a danger to world security.


The book has an intriguing subplot on the continuing travails of the magazine publishing industry. It is ever more difficult for a thoughtful independent magazine such as Millennium to survive in a media world driven by brief celebrity driven stories. A major Norwegian media empire has taken a significant minority stake in the magazine. Tension is rising between the business goals of the investors and the editorial leadership of Blomkvist and Erika Berger.


Lagercrantz cannot quite draw together the threads of a thriller like Larsson. I missed the driving momentum of the plots in the trilogy.


For the first time in a long time I felt a 400 page book was not long enough for the plot. Larsson’s original trilogy averaged over 600 pages per book. Except for the last book in the trilogy I thought the lengths suited the plots. The complexities of The Girl in the Spider’s Web could not be properly developed in 400 pages.


I am not sure whether I will read another by Lagercrantz in the series. As with most writers who try to carry on the series of a deceased author the new story goes well but not great. I kept wishing the 4th book had been the one Larsson had started before his death.
Posted by Bill Selnes at 10:55 PM