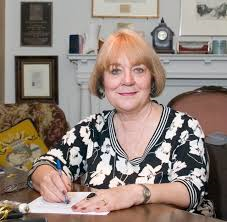 During the summer I read and reviewed the 15th Joanne Kilbourn mystery by Gail Bowen. I have had a chance to do a Q & A with Gail on writing and the series. As always she is forthright and interesting. I thank Gail for her candour and look forward to the next mystery to be published next spring.
1.) When you started the series did you have a plan for how many books would be written?


No!!!  #16 in the Joanne Kilbourn Shreve series will be published on March 1, 2016 and I’m well into writing #17.  When I started the series, I had three children at home; I was teaching full-time at the university; I was very involved in politics and I was teaching Sunday School.


The opening of Deadly Appearances grew out of an old fashioned political picnic when Roy Romanow had just become leader of the party. The picnic Joanne is attending is exactly the picnic I was attending. I remember looking at the truck flatbed we were using as a stage.  A carafe of water for the new leader was sitting on the edge of the flatbed and I remember being so proud that we lived in a country where a leader’s carafe of water could be left unattended with a few hundred people swarming about.  Then I thought, “What if someone slipped poison into the water.”  That was the beginning, and I had no plan to go beyond that one book.  Then the idea for Murder at the Mendel crept into my mind; after that, The Wandering Soul Murders began to take shape.  The ideas have kept coming and I’ve kept writing.


2.) Anthony Bidulka has told me that his Russell Quant series is on indefinite hiatus. He said his passion for writing was taking him to new projects such as his Adam Saint series. You have continued to write excellent books featuring Joanne. What has been able to keep you inspired to write more Joanne Kilbourn mysteries?


First, I should say that I wish Tony would revisit to the Russell Quant series. I loved those books.


About me.  I made the decision to have Joanne age in the course of the books and that’s been a great boon.  Her life changes; new people come into her life; the nature of her work changes; her children grow up; she has relationships and her priorities change.  All of these changes have given me rich material from which to draw.


The continuing cast of permanent characters has also been a gift and a source of inspiration.  Readers care about Joanne’s children and the friends who have become constants in her life: Howard Dowhanuik, Jill Oziowy, Margot Hunter, Brock Poitras, Delia Wainberg, Blake Falconer, Chris Altieri, Kevin Hynd to name a few. Each of these characters has a story and those stories give me firm ground from which to explore issues that concern me.


Finally, Alistair MacLeod once said, “Writers write about what worries them.” And there seems to be no shortage of issues that worry me.


3.) I must admit I regret Zack leaving the courtroom for city development and now municipal politics. Might we have Angus stepping forward into legal cases with Zack providing some mentorship?
In book 17 Zack’s life changes radically.  I can’t say much more than that, but in The Winners Circle, the firm of Falconer Shreve, Altieri, Wainberg and Hynd is once again front and centre.


4.) As with some of the characters residing in North Central Regina I have clients with multiple challenging issues in their lives. While they retain me to address their legal issues I find myself occasionally providing advice that is more properly related to their personal problems. I justify it on the basis that were they to better address personal matters they would have fewer legal problems. At the same time I realize I have been blessed in my life not to have all their challenges. I was impressed that Joanne recognizes the difficulty of helping from a position of privilege. What did you draw on to make Joanne a practical activist?


Truly, I drew upon my own experience. In my adult life I’ve moved from starry-eyed idealism to a much more pragmatic approach to how we can create a community in which everyone has a chance to create a good life. Like you, I am acutely aware of the fact that I have been blessed, but to paraphrase J.S. Woodsworth, I believe we have to work for a world where these blessings are shared with others.


5.) I can barely believe that I have just realized that I have never asked you in our past exchanges why both of Joanne’s husbands have been lawyers. There are lots of occupations. It cannot be accidental that each of her husbands is a lawyer and that one of her sons is a lawyer. I would be very interested in knowing why lawyers are so prominent in Joanne’s life.


It happens that I know a number of lawyers and I know a disproportionate number of judges. They don’t always talk shop when they’re around me, but the topic of the law does come up, and their very different attitudes towards the law intrigue me.  A judge friend says the law is simply plumbing, and lawyers are plumbers.  Other lawyers see the law as a beautiful and complex intellectual construct. One thing they all agree on is that there’s a lot of drudgery in the day to day work, but there are also some immensely satisfying moments, especially in trial law.
****
Posted by Bill Selnes at 10:40 PM