The Girl Who Kicked the Hornet’s Nest by Stieg Larsson 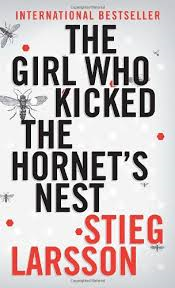 When I was done reading The Girl Who Played with Fire I desperately wanted to read the third in the series, The Girl Who Kicked the Hornet’s Nest, but it was the fall of 2009 and the book had not yet been published in North America. During the winter the Sleuth of Baker Street bookstore in Toronto obtained some copies of the book from England where it had been published. I thought about buying the English edition but it was $60.00 and I had never paid that much for a work of fiction. I waited until it was published in North America and was glad I waited.


29. - 542.) The Girl Who Kicked the Hornet’s Nest by Stieg Larsson – The third volume of the triology is well crafted but lacks the unpredictability and passion of the opening two novels. It  did not exert the same hold upon me. As the books carried on the plot initiated in the first it would have worked better had I been able to keep reading from the second to the third. Lisabeth plays a surprisingly subordinate role spending most of her time in hospital recovering from her grievous wounds. The thriller revolves around Mikael’s efforts to gain support for Lisbeth and identify the members of the secret service conspiracy who are seeking to have her returned to a mental institution for life. The return from retirement of the conspirators who originally had her confined as a teenager was chilling. However, the forces mustered by Mikael were clearly superior and the ending was never in doubt. Larsson, not Greaney, is the true successor to Robert Ludlum. Mikael’s relationships with women remain unconventional. It was disappointing in comparison with the first two books but remains a wonderful story. I have heard a 4th novel had over 300 pages written before Larsson’s death. Considering the worldwide success with all three currently on New York Times bestseller lists - the second has been on the trade paperback fiction list for 55 weeks – I expect it will be finished and I will instantly buy it. (July 12/10)
Posted by Bill Selnes at 11:27 PM