The Crossing by Michael Connelly 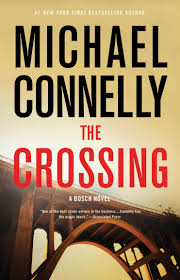 The Crossing by Michael Connelly – Harry Bosch has retired but it has not been a graceful exit into the sunset. A suspension without pay over his actions in The Burning Room pushed him to retire so he could access pension and deferred retirement income. Being Harry he did not accept the shove and, after retiring, hired his half-brother, Mickey Haller, to sue the Police Department over its actions. Only Harry could still be fighting the bureaucracy in retirement.


With Harry retired Mickey immediately asks Harry to work for him on the defence of a former gang member, Da’Quan Foster, who is now an artist and teacher. He has been charged with brutally raping and murdering Lexi Parks, a city manager, whose husband is a Sheriff’s deputy.


The trial is six weeks away and Mickey needs a skilled investigator. His regular investigator, Cisco, has been injured in a motorcycle accident and cannot work with Mickey.


Harry tells Mickey he already has a retirement project – restoring a 1950 Harley motorcycle. While Harry genuinely wants to restore the motorcycle no one believes it is enough to occupy him.


Mickey tells Harry that Foster is innocent. Considering the evidence includes the DNA of the accused (semen found in and on the victim) Harry is skeptical. Through his career he has heard the guilty protesting innocence. Yet Foster is now a well-regarded artist, conducts art programs for children and has a wife and two young children. There is a stirring in Harry that all is not right.


At the same time Harry struggles with the concept of going to work for a defence lawyer. He knows that he will be ostracized by former colleagues if does defence work. As a police officer Harry felt contempt for officers who worked for accused after leaving the force.


With his customary enthusiasm Mickey assures Harry that if he does not believe Foster did not commit the crime he need not continue to work for the defence. It is a shrewd assurance. Harry does not want to work to create reasonable doubt. He will only work a case for the defence to find the real murderer thereby clearing the client.


Mickey arranges for Harry to have access to the murder book of the investigating officers. With his customary thoroughness Harry reviews the book. He is impressed that the officers have done more then assemble the evidence that implicates Foster. They have carefully reviewed facts and individuals around the victim and not found evidence that would suggest a different killer.


Harry is uneasy that the investigators are unable to find a crossing between Foster and Parks. The nature of the murder strongly suggests it was a planned killing. It was not a random act of violence.


Harry explains to Mickey the importance of the crossing:


“Motive and opportunity. They’ve got DNA that puts your man in that house and at that crime scene. But how did he get there? Why did he get there? This woman led a fairly public life. City Hall hearings, council meetings, public events, and so on. According to the records, they looked at hundreds of hours of video and they don’t have one single frame that has both Lexi Parks and Da’Quann Foster in it.”


After poring over the book Harry is led to wonder about a couple of issues. He asks to meet Foster and his interrogation skills provide a lead.


Mickey is not at the interview as he has been arrested on an alleged driving while under the influence charge. It is false but Mickey spends a night in jail and receives considerable media attention on his release. Being Mickey, who lives by the principle that all publicity is good publicity, he walks out the front door and gladly faces the assembled crowd of microphones.


At home Harry is trying to appreciate the final days Maddie will be with him before she graduates from high school. It is a time of gleeful anticipation for Maddie and dread for Harry that all parents who have had children graduate from high school will appreciate. Maddie will soon be in university and Harry can see the emptiness ahead.


In a nice touch of connectedness Maddie will be rooming with Hayley, Mickey’s daughter, at Chapman University in Orange County.


Connelly weaves another excellent murder mystery. My only regret is that he is staying with the approach of one dimensional bad guys. Excellent would become great with at least some complexity to the killers. This reservation does not diminish my love for Connelly’s books. I eagerly await this year’s new book. I hope it will see Harry and Mickey together again. They are a formidable team.
****
Posted by Bill Selnes at 11:24 PM