A Great Reckoning by Louise Penny - The Academy 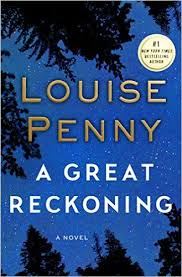 A Great Reckoning by Louise Penny – Since retiring from the Sûreté du Québec Armand Gamache has been receiving a stream of offers from “major corporations, to political parties anxious for him to run for office, to police organizations, national and international”. After patiently weighing the opportunities he has become the commander of the Sûreté Academy which trains officers for the force.


Ordinarily it would be a perfect fit for Gamache. He has spent a lifetime of mentoring and training young officers after graduation.


Yet running the Academy is a far greater challenge from when Gamache was a student. Under the previous corrupt leadership of the Sûreté the Academy has become a vicious place turning out brutal officers. Evil now lurks about the academy.


While the Academy was nominally led by a senior officer it was the second-in-command, Serge Leduc, who actually ran the institution. Known as the Duke he formed the young recruits while carrying on assorted illegal activities.


Gamache dismisses many of the professors but startling everyone, especially Leduc, Gamache keeps Leduc on as a professor.


Even more shocking Gamache reaches out to Michel Brebeuf and asks him to teach at the Academy. Brebuf has disgraced the force and betrayed Gamache, his childhood friend.


After classes begin Gamache comes to appreciate how difficult it is to change the culture of an academic organization, even if he has the authority of a commander in a police academy.


As part of his efforts to re-make the Academy he reviewed every new application and admitted some unlikely candidates.


Most striking is Amelia Choquet. Swiftly nicknamed Goth Girl she has multiple tattoos and piercings. Her high school marks were “abysmal”. She was a rooming house away from life on the streets. Yet she has taught herself ancient Greek and Latin.


As Gamache labours at the academy Reine Marie has become involved in archiving material donated to the regional historical historical society.


Aged poet, Ruth Zardo, is reviewing a cache of documents and papers found in the wall of Gabri and Olivier’s bistro in Three Pines. In her review she comes across a map. Its uniqueness and importance will be considered in the third post I will be writing about A Great Reckoning.


As the school year progresses Gamache is trying to determine if he is making progress in changing the Academy.


Readers learn about four students, two new and two graduating, among the group of students and professors that have spent numerous evenings with Gamache.


The Academy is thrown into chaos one late winter morning when the Duke is found dead in his rooms. He has been killed by a single shot to the head fired from a traditional revolver that he had stored in his bedroom. There are no signs of a fight. Though the scene is clearly staged it was not done to suggest a suicide. Why was this tableau created and what is its hidden meaning?


The location, characters and murder set up a mystery that is enthralling. While it is possible there was an intruder the expectation is that the killer was residing at the Academy. The Sûreté homicide unit led by Gamache’s former colleague, Isabelle Lacoste, must investigate both the students and faculty of their own force. All the professors are experienced police officers with extensive knowledge of murder. All, including Gamache, are suspects.


Lacoste reflects on the words of Mathew 10:36 that Gamache, when he was in charge of homicide, would pass on to new members of his squad:


And a man’s foes shall be they of his own household.


The dynamics of the academy alone make this a compelling mystery. Penny then develops a fascinating plot line involving Three Pines. Her skill in combining the stories and reaching into the past is breathtaking. My next post explores why I find the 12th book in the series far better than some recent Gamache stories.
****