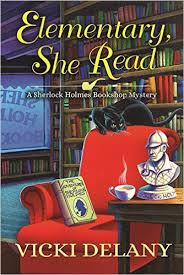 Gemma Doyle, in Elementary, She Read by Vicki Delany, is part owner and manager of the Sherlock Holmes Bookshop and Emporium in the town of West London on Cape Cod.


She describes the books stocked:


As well as reprints of the original Sir Arthur Conan Doyle books, we carry new books representing anything and everything in the pastiche or vaguely derived from the Holmes legend. From Laurie R. King’s Mary Russell (a.k.a. Mrs. Holmes) mystery series to The Case of the Curious Incident of the Dog in the Nighttime to Holmes for the Holidays and all the myriad short story collections inspired by the canon …… one wall of shelves is labeled “gaslight” and features novels or anthologies, mysteries mostly, set in the late Victorian or early Edwardian period. Another shelf is for nonfiction, including biographies of the age, anyone and everyone Sir Arthur Conan Doyle might have bumped into in his travels, as well as the histories of the times in which Sir Arthur lived.


Collectibles join them to create a Sherlockian atmosphere.


As I read of the Sherlock Holmes Bookshop and Emporium I thought of my favourite bookstore, Sleuth of Baker Street, located in the Leaside neighbourhood of Toronto for almost 40 years. For the over 25 years I have been going to Sleuth it has been owned by J.D. and Marian.


Their stock has far greater range than the fictional bookshop of Emma Doyle. At Sleuth you can find books by a huge number of contemporary and classic crime fiction authors.


What makes the bookshop in Elementary, She Read especially inviting is a reader’s nook with a big armchair. The cover above provides a wonderful image.


When Sleuth was in its second location on Bayview Avenue – it is now in its third spot - there was a reading corner with a fireplace. There were two big inviting leather armchairs. In the mid-1990’s our teenaged son, Jonathan, was so wrapped up reading a mystery he did not notice that his running shoes were smoking.


Murder on the Beach bookstore in Delray, Florida also has two big armchairs in the store. While I browsed one afternoon Sharon said they were most comfortable.


Welcoming visitors to the fictional bookshop is Moriarty the cat. Quite accepting of shoppers Moriarty disdains any attention from Gemma.


For three decades Sleuth had a series of resident cats – Porky, Winston, Popi aka Ploppy, Princess, Peaches, Petosky, Perry and Paddington. Their presence added to the presence of the store.


Since 2008 the resident pet has been a dog called Percy. Sadly Percy is suffering from cancer. A couple of months ago I read in Sleuth’s newsletter, Merchant of Menace, a new dog, Pixie, has joined Percy at the store.


The fictional store has an adjoining café, Ms. Hudson’s Tea Room. Its presence reminded me of the café almost next door to the Murder on the Beach bookstore.


If I didn’t have to earn a living, I’d keep the bookstore as my own private library. I wouldn’t let anyone else come in. I could regularly order the newest books and reread old favourites. The shelves would be neatly organized, and I’d never have to search for anything misplaced by a careless employee or absent-minded customer ….. I enjoy being alone in the Emporium before it opening. It’s quiet and peaceful, and everything is in its proper place. Just me and the books. And Moriarty, glaring at me over the arm of the chair in the reading nook.

3.) Writing as Eva Gates the Lighthouse Library Series
with Lucy Richardson - (2014) -  By Book or by
Crook and Bodie Island Lighthouse; (2015) - Women v. Men in
Clothing Descriptions