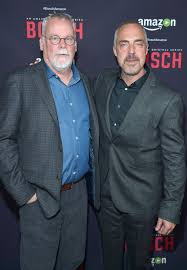 In my last post I discussed the first season of the television series Bosch based on the mysteries by Michael Connelly. As in books of crime book fiction I consider the most important element of crime television the sleuth. For every book series I have a mental image of the sleuth sometimes from the description of the author, sometimes from how the sleuth acts and speaks. When it is a television series based on a book series it is inevitable that my enjoyment of the series is heavily influenced by the choice of actor to play the sleuth.


The one T.V. sleuth I am unlikely to be influenced by in the choice of actor is Sherlock Holmes. There have been so many different Holmes in film and television that I no longer have a strong mental image of Holmes.


I have never thought American casting, especially in television, of book sleuths has been well done.


Neither Joe Mantgena nor Robert Urich were my image of Spenser. I always thought Robert B. Parker better fit my image of his sleuth.


Most recently I disliked the choice of Nathaniel Parker to play Chief Inspector Armand Gamache in the film version of Louise Penny’s book, Still Life.


I have been more comfortable with most English choices.


I consider the very same Nathaniel Parker to be the image of Lord Lynley from the mysteries of Elizabeth George.


David Suchet is bound to be my enduring visual image of Hercule Poirot.


Best of all was Leo McKern as the blustering barrister, Horace Rumpole. His personality, appearance and mannerisms were perfect for John Mortimer’s Old Bailey hack.


To be fair there have been successful choices in America. Robert Taylor from the T.V. series, Longmire, is my image of Walt Longmire from the books by Craig Johnson.


This lengthy preamble brings me to Titus Welliver who plays Harry Bosch in the T.V. series. I consider Welliver inspired casting.


He has the right stature for Harry. In the books Harry was not a large man befitting a man who was a tunnel rat in the Vietnam war. Described in the books as a few inches under 6 feet I think of him as 5’9”. Welliver is listed at 5’11 3/4” but he does not strike me as that tall on the screen. I have a feeling the height of male actors is as often inflated as the heights of male athletes.


I always saw Harry as a solid guy. He is lean in the books but I never thought of him as slender. Welliver has enough heft to be solid. He is not going to be pushed around.


The Harry of the books is volatile. He has little patience with those he considers fools. He has no innate respect for authority. He is thin skinned. Welliver captures those elements of Harry. He is quick to take offence. He lets superiors know if he disdains them.


I am glad that T.V. Harry has grey hair edging towards white. I could never see the Harry of the books dying his hair. It would be a vanity. It jars me to look at Tom Selleck on the T.V. series Bluebloods with jet black hair at 72.


Harry of the books has a presence. When he enters a room he is the focus. Supervisors resent the attention he draws from other officers. Welliver has that touch of swagger.


I have known but a few men who went through life unafraid. Not always physically imposing they had a mental toughness that made them virtually unbeatable in conflict. Welliver convinces the viewer he will take on anyone at any time. If he loses it will be a surprise and he will go down fighting.


When Harry learns he has a daughter in the books he is awkward and struggles with establishing a relationship as a father. He has not truly had a loving family relationship since his mother was murdered when he was a child. Welliver’s interaction with Maddy reflects that vulnerability. He clearly loves his daughter but showing affection and committing to building a relationship is a challenge. In the books he becomes Maddy’s physical parent. I have been wondering if Maddy will come to live with Harry in the T.V. series.
When I look at Welliver and Connelly together in the photo at the top of this post I think they could be brothers.