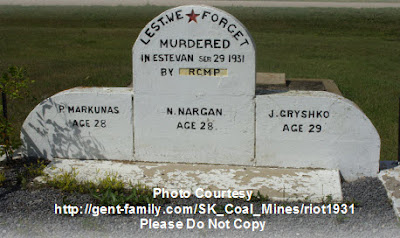 In my previous post I reviewed Black Thursday by Scott Gregory Miller, the second book in the Myles Sterling series. The murder of centenarian Dr. George Sterling in 1994 is connected to the strike in the early 1930’s by miners that climaxed in a violent confrontation between striking miners and the RCMP in Estevan.


Prior to the Great Depression coal mining had begun in the Estevan area. The mines were about 100 feet under ground and followed the seams of lignite coal. In recent decades there has been strip mining of the coal with giant draglines. A huge dragline is featured in that part of the book set in 1994.


With the onset of the Great Depression issues and tensions grew steadily between mine owners and miners.


Black Thursday is distinctly sympathetic to the miners. Already low wages were cut and miner families lived in shacks ill-suited to cruel Saskatchewan winters. Research shows Saskatchewan miners were being paid less than half of what miners in Alberta and British Columbia were being paid.


In the summer of 1931 union organizers from the Mine Workers Union of Canada travelled to the area at the request of the miners. Despite the threats and intimidation of mine owners many were ready to join the union.


In the book and real life there were avowed Communists in unions. A couple of years later the Canadian Commonwealth Federation (the CCF) political party was formed in Saskatchewan. It was socialist rather than Communist though many considered its principles Communist. In 1944 the CCF became the first socialist part to win provincial elections and govern Saskatchewan.


Back in 1931 a strike was declared and the mines shut down.


The violent climax of the strike occurred on a hot September afternoon in Estevan. Miners had formed a procession of vehicles, many horse drawn, to travel from their residences in and around Bienfait to Estevan where they planned a protest parade.


When the procession came into town they came up against a group of Estevan police officers. The Police Chief grabbed a striker and trouble erupted. The situation escalated when miners took over a fire engine trying to hose them down. The city police were bolstered by RCMP officers. Rocks (miners) and bullets (Police) began to fly. Initially the police were firing into the ground but inevitably bullets went higher.


When the violence ceased 3 miners (Peter Markunas, Nick Nargan and Julian Gryshko) were dead. They were buried in the cemetery in Bienfait with a headstone that is a powerful political statement as shown on the photo. The inscription reads:


The headstone has been a continuing Saskatchewan story. Soon after its placement it was defaced by having the words “RCMP” cut out. At least one source said the Bienfait Town Council instructed the offending word be removed. Over the years “RCMP” has been periodically removed and then replaced. You can see on the photo of the monument that “RCMP” has had to be inserted again.