Final Appeal: Anatomy of a Frame by Colin Thatcher 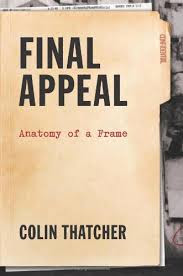 Final Appeal: Anatomy of a Frame by Colin Thatcher – In Saskatchewan’s criminal trial of the 20th Century Colin Thatcher was accused and convicted of murdering his wife. In Final Appeal he presents evidence and arguments in support of his position that he was framed.

Thatcher, son of a Premier of Saskatchewan, was a successful rancher / farmer and a prominent politician (a provincial Cabinet Minister). He married Joanne Geiger from Iowa and they had three children. Their marriage faltered and the breakup was brutal. There was a massive custody fight won by Joanne. After the court case she was shot in the arm by someone, never determined, firing a rifle from outside her home. Almost two years later, on the evening of January 21, 1983, she was murdered in the garage of her home on Regina’s busiest street, Albert Street, near the Legislative Buildings. From the moment of her death Thatcher was the prime suspect.


It was a case that transcended Saskatchewan’s borders drawing massive media attention across Canada and extending into international news coverage.
I had been practising law in Saskatchewan for 9 years when the trial took place in 1984. I was as absorbed in the trial as everyone else in the province. (I have no personal knowledge trial of events. I did not attend. I have not spoken to any of the participants case. I do know the lawyers and the judge from my legal practice.)


I read the book primarily to see what Thatcher said about his legal strategy and the decision to have him testify in the trial.


Arrogant or self-confident Thatcher was a man accustomed to getting what he wanted. His strong minded personality had grated on many people over his lifetime. He has forceful opinions and has not hesitated to state them bluntly. I wondered how he would respond to legal advice.


His defence started badly when Thatcher, rejecting the advice of Tony Merchant who had been his divorce lawyer, insisted on Merchant proceeding with a bail hearing the day after he was arrested. There was no chance of adequate preparation and the application was denied. Thatcher would have to work on his defence while incarcerated.


He hired Gerry Allbright to be his defence counsel. Allbright is now a Queen’s Bench Justice in Saskatchewan.


As the trial date neared, Gerry and I earnestly discussed the question of whether or not I would testify. I felt I had no choice; Gerry did not necessarily agree. Because of my legislative experience, I believed any jury would demand they hear me say, “I didn’t do it.” Choosing not to testify was a luxury I did not believe I had. Gerry thought our strong alibi defence might make my testimony unnecessary, especially if the court accepted the Beaton affidavit into evidence. I was skeptical, but we left the decision open.


His personality is encapsulated in his belief “the jury would demand” to hear him testify at the trial. It speaks of a man with an extraordinarily high opinion of himself and his status in the province. I believe any jury chosen to try him would have been interested in what he had to say but I equally believe they would not expect, let alone demand, he testify. Thatcher had no confidence in a jury heeding the standard jury instructions that they are not to draw any inference from the accused choosing not to testify at trial.

As Thatcher is a man who believes fervently in "conservative" principles I have wondered, without knowing, if he was projecting on the jury about to judge him how he, were he a juror, would have expected the accused to go on the witness stand and deny guilt.


On whether to call the accused to testify, Emily Couric, addressed the issue in her book, The Trial Lawyers. Written in the late 1980’s it is a fascinating book on how ten prominent American trial lawyers conducted cases. In The Trial Lawyers criminal defence counsel took contrary positions on whether to call the accused in criminal jury trials. From my review of the book:


1.) James F. Neal (Tennessee) – It is very difficult to win without putting the defendant on the stand. You need the defendant to articulate a rational defence;


2.) Richard “Racehorse” Haynes (Texas) –He avoids the defendant testifying as he worries the jury will misjudge the defendant; and,


I generally believe that if there is going to a jury trial the accused should testify. I think juries want to see what the accused has to say about the evidence.

(In my next post I continue the discussion of Final Appeal and the decision on whether or not an accused should testify at a jury trial.)