After James by Michael Helm 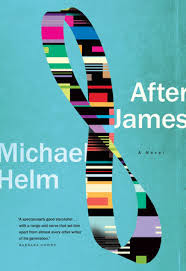 After James by Michael Helm – The most challenging book I have read in a long time. After James was the second book I have read on the Arthur Ellis Best Crime Fiction Novel shortlist for 2017. Its complexity means the posts I will write about the book contain spoilers.

The book opens like a mystery with a dog finding the body of a woman in a shallow grave. The dog is shot by an unknown killer. The bodies of the dog and woman are cremated.

The story proceeds with Alice, a scientist with a big pharmaceutical company in Vancouver. She has left the company over its actions with regard to a drug she has designed, “a narcotic-free neuroenhancer of generative and lateral thought. A creativity pill”. She is now “somewhere north of Georgia, south of the Canadian Shield”.

She describes her drug in a letter she is drafting to a whistleblower site:

In time it took form as a rectangular yellow pill with bevelled edges. She didn’t include (in the letter) the company’s name for the drug – Claritas .4 – it would identify Gilshey (it would come out in time, of course), and anyway it was the wrong name. The name that came to her was Alph. She designed the drug. It should have the name she gave it.

Its effects are intense:

Almost three-quarters of volunteers reported a “jump cut” feeling of having lost two or three seconds of time during composition. Many reported a sense of lucid dreaming while awake. The feeling was of some other agent authoring a part of their experience, their sense of self-command undermined by changing contexts, parallel realities. One described his lab session, going to play tennis, and in the middle of a long rally seeing himself in a staged swordfight against dozens of foes, as if in an old swashbuckler movie. In the lab they called this the Daffy effect, in reference to the Loony Tunes segment in which Daffy and his world are repeatedly redrawn by the animator midstory.

The designers speak of the drug as “an engine to accelerate the real”.

Alice is concerned over the mind altering effects of the drug. She takes the drug. The results are startling. To this moment the book has an intriguing crime fiction premise related to a death, big pharma, Aleph and a whistleblower.

Instead of continuing with that plot line, while under the effects of the drug, Alice follows up on information left behind by the wife of a couple, gone to Africa on a mission, with regard to a mysterious neighbour and his Russian wife. Eventually she meets the neighbour, Clay Shoad, a sculptor recovering from serious injuries.

Dominating his work is an amazing work:

… the shape resolved into a sculpture made from antlers wired together to form, through some closed loop of conception, a giant deer buck. It was ten feet high at the shoulder, fourteen or more at the top of its rack.

Is Alice, alone with Shoad, in danger? The implication of the opening supports risk but there is no more to this story.

Abruptly, just over hundred pages into the story James is introduced:

In truth I am only a failed poet. A failed many things. Bartender, textbook editor, doctoral student, orchestrat publicist. I have no talent but reading.

He has recently been orphaned. His parents died, ostensibly in a car accident, while working at a Turkish refugee camp near Syria.

James is hired by August Durant to analyze the poems of a poetry website, Three Sheets. Durant believes the anonymous poet has written poems that will explain why Durant’s daughter has disappeared three years earlier.


(My next post continues my review.)
Posted by Bill Selnes at 10:14 PM