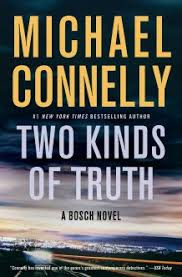 Bosch was where he was at the start of most weeks: sitting at his makeshift desk, a wooden door he had borrowed from the Public Works yard and placed across two stacks of file boxes.

His desk is in a jail cell:

…. the former cell now fitted with steel shelves containing case files. There was a long communal bench left over from the eell’s previous existence as a drunk tank.

Connelly challenges Bosch’s image of himself in the context of his case history. Over his career he has often dealt with cold cases in which he has searched old files for a piece of information overlooked or a witness either missed or not properly interviewed or applying new forensic techniques.

Now a small semen stain has been found in clothing from a murder victim, Danielle Skylar. It is from a violent sex offender and murderer, Lucas John Olmer. He is not the man, Preston Borders, whom Bosch had identified as the killer and was convicted of Skylar’s death. Has Bosch made a mistake?

Being a perfectionist Bosch is sure, as always, he never made a mistake. Connelly creates a high standard of expectation for Bosch by making him a perfectionist. As no one in real life is perfect I find it fascinating to wonder as I read if Connelly will show Bosch to be human and err or find a way to explain the inexplicable – how did Olmer’s DNA end up on clothing in a sealed box where Bosch’s signature on the tape sealing the box looks to be untampered.

Connelly does not provide easy cases for Bosch to remain perfect. You can be perfect if you do not take up the challenge of difficult cases. No real life trial lawyer wins them all unless the lawyer declines to take tough cases to trial.

Connelly brings in unusual law enforcement issues credibly. In Two Kinds of Truth it is the Health Quality Investigation Unit at the California Department of Consumer Affairs. They investigate with regard to the over prescription and unlawful prescription of drugs.

I love how Connelly will bring back characters from earlier books, often in a new position. Here uses the Unit as a means to have Bosch's old partner, Jerry Edgar, return as an investigator for the Health Quality Investigation Unit.

Connelly finds creative ways in plots for Bosch as he ages to both challenge the stereotypes of a senior citizen either being stuck in the office or engaged in implausibly physical feats. Here Bosch goes undercover as a pill shill – an addict who goes from shady doctors with prescriptions for opioids to shady pharmacies to get the bills – for a criminal enterprise. He is perfect candidate for the operation as he is a senior and active police officer. His age creates less suspicion in the gang that he is a plant. The process of going undercover was unconvincing in its briefness but Bosch has credible dangerous experiences undercover. At the same time Bosch will mix it up with the bad guys. There is a confrontation which is physical and believable.


Intentional or not I appreciate that Connelly has written books since the Bosch T.V. series started that re-affirm Titus Welliver, the T.V. Bosch, as my mental image of the book Bosch.

At the same time as I greatly enjoy the books I regret some tendencies in recent books in the series. I have also found interesting Connelly's use of contradictions in Bosch's actions. I will explore those issues in my next post.