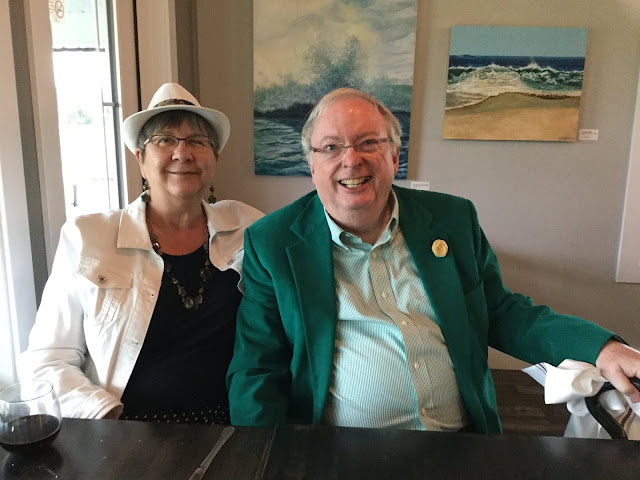 Sharon and I celebrate our 40th wedding anniversary tomorrow. We were married in Humboldt at St. Augustine's with 3 priests (Father Maurice, Father Florian and Father Lawrence) from St. Peter's monastery con-celebrating our wedding Mass. It was a lovely summer day.

To celebrate tonight we went to Nipawin for supper at the Mabel Hill Farm Kitchen and Marketplace. We had a wonderful meal. Our server, Skylar, took the above photo of us. 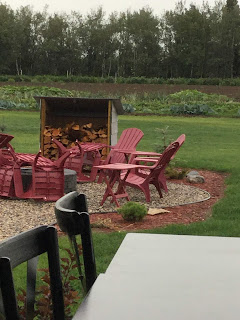 Mabel Hill is just east of Nipawin. The restaurant is bright and airy. Outside our window there was
outdoor seating on the deck. Had it not been raining it would have been great to have eaten there.

Beyond the deck is a grouping of chairs around a fire pit.

Past the pit is a field of fresh vegetables.

In addition to supplying the restaurant there are pickled vegetables for sale. 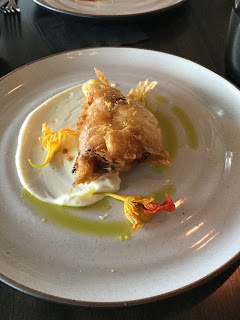 We started with an appetizer of a zucchini blossom stuffed with ricotta and crab and lightly deep fried.

It was beautiful and delicious. 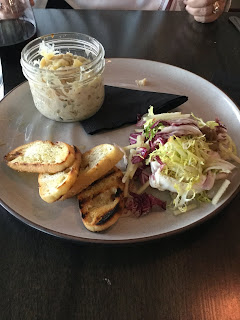 We went on to have crab dip for second appetizer. Accompanying the dip was a small salad which included fennel, apple and celery. It was
delicious. We asked for extra crostini.

During the meal we chatted with Mieka, the General Manager. I said the restaurant had the feel of a European country restaurant. At the same time it has the freshness of a new building and the space of Western Canada around the restaurant.

We said we hoped they would consider a tasting menu. Mieka said they have done it on one occasion and may do it again. 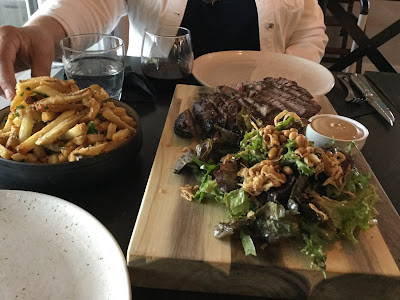 For the main course we had a ribeye steak for two that had been dry aged for 38 days. We appreciated that it was pre-sliced.

There was a black garlic aoli sauce for dipping the steak. It was a great match.

To the side of the steak were "maple balsamic dressed greens with soy nuts".

In the bowl were truffle fries. Sharon loved them.

For dessert we had deconstructed
Black Forest cake. The presentation was striking. I thought the cherries were the best.

As we were eating I thought of another rural Saskatchewan restaurant, Rawhide's which is down in Stenen. Both are located in the country. Each features fine food expanding the choices for dining outside Saskatchewan's major cities. 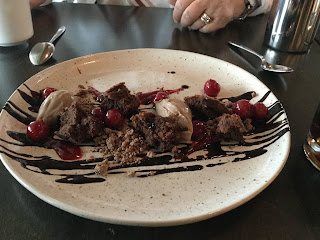 Sharon and I had previously enjoyed a meal Chef Michael Brownlee had prepared at Creekside Orchard in Melfort. He told the diners of his dreams for what has become Mabel Hill. He has succeeded brilliantly.

Sharon and I had a special evening.