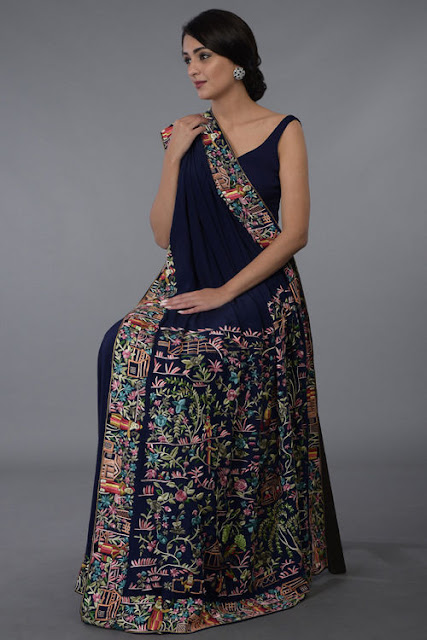 In the two legal mysteries bu Sujata Massey set in the early 1920’s featuring Perveen Mistry, the first fictional woman solicitor in Bombay, wears beautiful saris that have a special draping as she is a Parsi, a member of the Zoroastrian faith.


In The Satapur Moonstone she travels to the princely state of Satapur. Her sister-in-law Gulnaz provides her with some beautiful gara saris suitable for a visit to the palaces of the maharani’s in Satapur. Mistry has lost her best sarees when she left her abusive husband in The Widows of Malabar Hill.


My blogging friend, Moira Redmond, of the fine blog, Clothes in Books, has made me far more aware of the clothes worn by fictional characters.


In The Satapur Moonstone Mistry wears to the evening meal with the maharani’s “a blue silk sari with Chinese embroidery. It was a classic gara that had been part of Gulnaz’s wedding trouseau, the very best sari Perveen had brought”.


At the top of this post is a photo of contemporary blue silk gara sari with embroidery.


In the Aashni & Co. Journal there is the following explanation of the Parsi gara:


The Parsi gara, in a nutshell, is three things. Indian embroidery with a Persian heritage and a Chinese origin. The Parsi embroidery can be traced back to 650AD where Persian women undertook the Indian style of clothing. Parsi men travelled to China and bought yards of silk fabric for their women. The gara was a result of inter-cultural amalgamation where the fabric was China’s and the embroidery was heavily influenced by India’s Hindu and Iran’s Zoroastrian cultures. 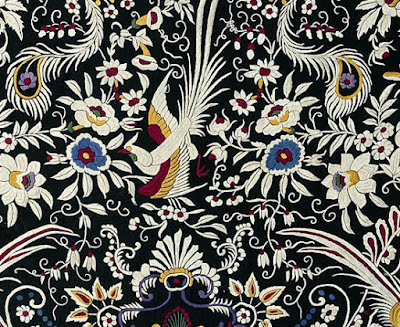 
The main stitches that are all intricately entwined are satin stitch, crewel stitch, stem stitch and French knot. Geometric designs are rarely used and most patterns are influenced by scenes and stories of Chinese origin, such as the bridges, pagodas, boatmen and shrines. The colours comprise of two shades. The base fabric is generally darker with ivory thread work or a pastel coloured textile is embroidered with multicoloured threads. 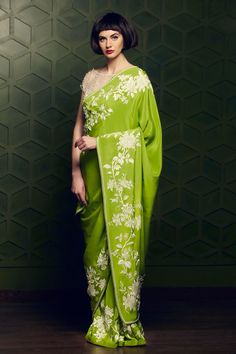 An example of that fine thread work is above.


Later in the book Mistry chooses another lovely sari to wear:


…. A lime-coloured sari embroidered with curling vines and blush colored camellias, one of the most elegant Gulnaz had packed for her.

A photo of lime green gara sari is to the right.


I have never seen in real life such saris. They are spectacular. Such saris indicate the prominence and prosperity of the woman who wears them. I expect they  would be prized for a lifetime.
****
Massey, Sujata - (2019) - The Widows of Malabar Hill and A First Woman Lawyer to be Admired; (2019) - The Satapur Moonstone