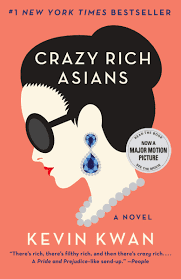 Rich People Problems by Kevin Kwan - The life and times of the super rich Chinese Singaporean families continued to fascinate me.


The impending death of the matriarch, Shang Sui Yi, brings the families physically together. Some might allude to a gathering of vultures as they fly in from Europe, North America, Australia, Hong Kong, Thailand and Mainland China. Each is very conscious about staying in the good graces of Sui Yi. She could change her will at the last moment.

Being rich does not save anyone from the travails of relationships and emotions.

Nick Young, once Sui Yi’s favourite grandson, is unsure about returning to say farewell because she was so cruel to him and Rachel. As he is a fundamentally decent man his decision on returning is no surprise.

Kitty Pong is now married to the extremely rich Jack Bing. The marriage produces the ironic situation that she is stepmother to Collette who is barely younger than Kitty. She remains desperate to achieve iconic status. To her frustration she keeps finding out that spending money does not guarantee position in society.

Eddie Cheng is just as desperate to be recognized as one of the elite. Beyond dressing his children in couture clothing that is embarrassing Eddie, lacking Kitty’s money, connives away to try to reach the top. His mother can barely understand how he is her son.

Oliver T’sien, urbane and connected everywhere in the world, demonstrates that facades are his best performances.

Astrid Leong in the midst of a tumultous divorce that confirms the rich are just as mean as the common folk when they separate. The dirty tricks are just more expensive and more intrusive.

Once again the matriarchs of the families are the most interesting characters. Nick’s aunts and their contemporaries are often outrageous and never dull.

In the third volume the realities behind great wealth are explored. Some characters have great riches. Others verge on bankruptcy.

The book is the darkest of the trilogy, especially in comparison with the opening book. There were good times, even joy, mixed with cruelty and excess in Crazy Rich Asians. In Rich People Problems the sadness and the tensions of death are illustrations rather than the heart of the problems for the very rich. Life is bleak for many in the book because of their characters. Kwan convincingly shows how money cannot buy happiness. What vast wealth does is mask problems and allow the rich people to avoid dealing with their issues.

As the trilogy drew near its end I wondered how Kwan was going to resolve the rich people problems. I was skeptical of the apparent resolution but Kwan came up with a credible and surprising ending.

If the stories were to return to the spirit of the opening book I would be glad to read more of the adventures of the ultra rich Singapore Chinese families.
****
Kwan, Kevin - (2019) - Crazy Rich Asians and China Rich Girlfriend