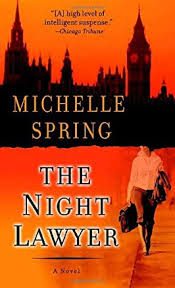 I have just returned from the 107th Grey Cup in Calgary. It was approximately the 19th Cup I have covered in my 42 years of reporting. I thought I would have time to post last week but it was not to be between going to Grey Cup events and writing columns and visiting our sons, daughters-in-law and grandchildren. If you want to read my columns they are available at www.humboldtjournal.ca. It was a good week. Not having written a review in the past 8 days I am posting an unposted review I wrote in 2008.
****
16. – 426.) The Night Lawyer by Michelle Spring – A brilliant premise as lovely young English lawyer, Eleanor (Ellie) Porter, starts work for the Chronicle, a London tabloid, as the night lawyer vetting articles at night for the paper. The part-time job suits Ellie as she has just recovered from a nervous breakdown triggered by the betrayal of her lover, William Du Quoyne. Unfortunately, the book did not live up to expectations. The story had really nothing to do with her job. For an intelligent lawyer, who is vigorously training to gain her brown belt in karate, her gushing willingness to resume the relationship with Du Quoyne lacked credibility. Her relationship with a Goth neighbor was bizarre. It did not seem realistic to ignore a stalker for much of the book. Her reluctance to establish a relationship with the handsome dependable editor, Jonathan, because of her hopes to renew her relationship with Du Quoyne was too much the romance novel approach. A casual sexual encounter with her karate instructor just confused me on her relationships with men. There was an interesting twist at the end that brought the themes in the plot together. Too often I found myself doubting the plot.  (Apr. 12/08)