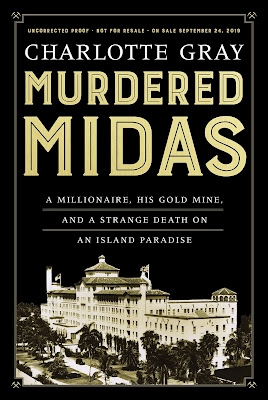 (30. - 1055.) Murdered Midas by Charlotte Gray (A Millionaire, His Gold Mine, and a Strange Death on an Island Paradise) - Murdered Midas won the 2020 Arthur Ellis Award for Best Non-Fiction. While interested in reading the winning book I was more drawn to the book as I wanted to know who Gray thought murdered Sir Harry. In 2014 I read Who Killed Sir Harry by Eric Minns. While titled a novel it was more a non-fiction recounting of Sir Harry’s death and the subsequent trial of his son-in-law, Count Alfred de Marigny, for murder. While Who Killed Sir Harry was not a well written book I was fascinated with the murder and trial. I wrote a post on who I thought had killed Sir Harry.

Murdered Midas opens with Harry Oates, 37 years old, and still searching for his big strike. For over 15 years he has pursued gold in the Klondike, Australia and California. His methodical approach to prospecting has yet to be successful. Gray recounts how most prospectors find silver or gold by luck.

Gray provides a vivid picture of the rough tough prospecting days of the first decade of the 20th Century in northern Ontario. The first rush was for silver. Millions of ounces of silver were mined. Oakes arrived shortly after the second rush for gold was underway.

He climbs off the train in 1911 at the community of Swastika (The Nazi adoption of the symbol was decades into the future.)

Swastika was the closest town on the railway to Kirkland Lake. Oakes, while broke by the time he arrived, had studied government information on claims in the area and the rock formations. He thought the significant amount of porphyry indicated gold. As the whole area was staked he waited to re-file some claims that were expiring because the original prospectors had not developed them.


Determining which claims he wanted to re-file was hard work:

…. Working thigh-deep in mukeg and bogs, and sleeping in either his tent or one of three lean-to shelters he had fashioned out of sacks and sticks.

On a frigid night, as low as -50, Oakes and the Tough brothers re-stake claims adjacent to Kirkland Lake. Oates had developed a theory that gold veins in the area ran under lakes.

Oates has been raising money from his family in Maine for over two decades and they stake him again. In true Hollywood timing, down to his last dollars he orders his men to dig deep under Kirkland Lake where they find the vein of gold 12 metres deep that will fund his fortune. It is 1916 and the 42 year old prospector has found his strike.

Determined to develop, not sell the claims he works hard to generate the investments that allow him to build the Lake Shore Mine. Retaining almost 50% of the shares he becomes immensely wealthy.

In the 1920’s he marries a lovely Australian woman, Eunice, whom he had met on a ship bound for South Africa. They have 5 children.

Angry over changes to Canada’s tax laws in the 1930’s he considers punitive he leaves for the Florida where he will pay less income tax.

He is lured from America to the Bahamas where he will pay no personal income tax. Harold Christie, a great real estate promoter, convinces Oakes of the opportunities as well as the tax freedom of the Bahamas. After the arrival of Oakes on the island of New Providence Christie sells him vast areas of island real estate.

Oakes has little patience with the colonial elite of Nassau. He goes to work on his lands with the zeal he had as a prospector. Occasionally he personally takes command of his bulldozer. The boredom of his days after developing the Lakeshore Mine is gone.

By the start of WW II he owns a huge amount of land on New Providence but he is having to weigh his expenditures as dividends have been in decline for some years as ore production declines at the mine.

The Duke of Windsor and his wife, Wallis Simpson, appointed as Governor of the Bahamas in 1940 are eagerly embraced by white society. They have fame. No couple was better known in the world. While their presence, especially the Duke, is inevitable in any biography of Oakes the Duke and Duchess did not have a major part in the life of the Oakes family. (As will be discussed as part of my next post the Duke had an important role after the death of Sir Harry.) While their official residence was being rebuilt Oakes generously provides the couple with one of his homes. In return the Royals bring disdain. The Duchess  disparaged the lovely Westbourne as “a shack by the sea”.

There is turmoil in the Oakes famiy from the marriage in 1942 between “Count” Marie Alfred Fonquereaux de Marigny and Nancy Oates, two days after her 18th birthday. He was almost twice her age. Sir Harry and Fredddie were soon in conflict.

On the stormy night of July 7, 1943 Sir Harry is murdered in his bed at Westbourne by being struck with a hammer. An effort is made to burn the body. De Marigny had driven by Westbourne well after midnight taking a pair of young women home.

The next morning, Christie, who had stayed overnight, discovers the body when he goes to wake Sir Harry. He handles the body saying it is still warm. He tries to give Sir Harry water believing he is alive.

Gray deftly describes the reaction of the Duke:

When the Duke of Windsor heard the news of Harry’s death, he made an instant decision that, in retrospect, was unwise - the latest in a lifetime of ill-advised decisions by the former king. Assuming that the case was byond the capacity of Nassau’s police resources (four officers and 140 constables), he looked elsewhere for help.

Instead of Scotland Yard or the FBI the Duke, having recently met Captain Edward Melchen of the Miami Police Department and found him “to be a very good fellow” he asks the Miami Chief to send Melchen to the Bahamas. Captain James Barker accompanies him.

That morning government officials, police and members of the public visited the crime scene leaving it hopelessly contaminated.

The Miami police swiftly concluded de Marigny was the killer and he is indicted. The Bahamian establishment is more than content with the outsider being charged.