The Curious Eat Themselves by John Straley 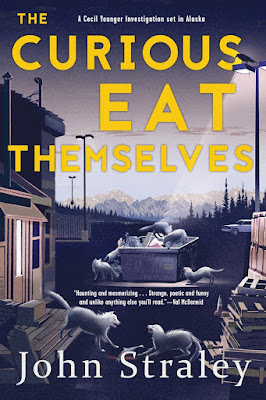 The Curious Eat Themselves by John Straley (1993) - Cecil Younger is watching the water under Creek Street in Ketchikan, Alaska with Hannah, “the woman who used to love me”, as a dive team searches for the body of his client, Louise Root. Hannah is bitter:

“I sent her for help, Cecil.
For Christ’s sake.
I sent her to you for help.”

Cecil has no answer as the naked body is found and pulled from the water. Her throat has been slashed.

George Doggy, Special Assistant to the Commissioner, is present. Long past retirement he provides sage advice to Governors in need of sound counsel.

Root had complained of being raped at a party by men she worked with at the Otter Creek mine. Unable to get the attention of (state) troopers or local police. Hannah, her long time friend, had sent her to Younger who was ready to investigate.

Hannah has to know more about what happened despite the obvious danger, but she husbands her knowledge.

Retreating to Sitka, Cecil is retained by Global which owns the Otter Creek Mine to search for information on Steven Mathews, a very public environmentalist.

Hannah joins him and strong emotions are stirred, They go to an island a short distance from town where Cecil has a roughly made sauna of cedar. In a sensuous passage they soak up the cedar scented vapour, exchange blood to confirm he will never betray her and then swim in the ocean amongst “billows of herring that flickered with the phosphorescence”.

At home Cecil’s roommate, Toddy, is devastated for his black Lab dog, Nelson, is missing. . Toddy, who is autistic, is desperate to find Nelson. Cecil finds Nelson who is dead after being hit by a truck or car. Unable to think of the words to explain the death Cecil does not tell Toddy. Cecil feels the ache of Toddy’s pain..

Mathews had come north to Alaska from the Lower Forty-Eight. He says he talks to the whales and the trees. He talked about “taking control of ‘our’ lands” at meetings of the Tlingit. And then he wore a shirt with a killer whale sewn on it saying that because he had an “affinity” for killer whales he was a part of the killer whale clan. Its members react negatively. The Tlingit were bound to react skeptically to someone described as an “environmental guru”.

When Cecil meets Mathews he is confounded. As with most people Cecil had pre-conceptions before meeting the man. Their conversation has a philosophical nature that unsettles Cecil.

Later Cecil interviews a man in jail whose mind was altered by some minutes without oxygen. Cecil asks if anyone can testify they saw him commit murder. He answers:

“I don’t know. The fish were running. Maybe a
gull.”

There is a powerful scene involving a Beaver bush plane (Cecil jumps out the door of the plane as it is taking off.)

At the heart of the book is the earth. An executive of Global tells Cecil:

“Real wealth comes from the earth. The people who want to control the earth, the ones who say they are speaking as advocates for it, really want to protect their wealth, their invesmtent, if you will, in this abstraction that the government calls money.”

Extracting, exploiting, exporting the resources of the earth is as real in Saskatchewan as Alaska.

Global expands its verbal expectations of Cecil. He is more at the mercy of his investigation than in charge.

The distances of Alaska must seem outlandish to those who live in more occupied areas of the world. Cecil travels over 1,600 km south to north and back again and never leaves Alaska. I am familiar with such long journeys in Western Canada.

Cecil, his personal demons barely at bay, is on the edge of returning to drink throughout the book. Known to be a sad drunk he is equally sad sober.

The story is interesting. The characters are intriguing. The use of setting is once again spectacular.

The first half of the book sparkles. The second half is alright. The plot becomes implausible for a while as Cecil abruptly takes off for Prudhoe Bay on the north slope of Alaska. I found the lead up to the ending contrived. I do want to read the next in the series, more to follow Cecil’s life than for his next case.