Maureen's Reply on The Woman Who Married a Bear 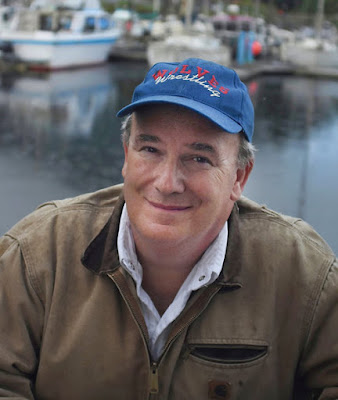 In my previous post I wrote a review of The Woman Who Married a Bear by John Straley in the form of a letter to my friend Maureen. She replied and her response is below. (Not all of her essay was included for reasons of editing and spoilers.) I appreciate her personal and thoughtful response.
****
Hello Bill,

I’m sorry that I took so long to answer your email. I'm making up for it with an overly long message, and I apologize for that too.

I was so pleased that you enjoyed The Woman Who Married a Bear. I wrote a short response to the novel for one of my classes this past winter, and in it I think that I actually answer some of your questions. I’ll write a bit here, but you might get a kick out of my mini-essay as well so I’ll attach it at the end.

So, I think that Straley does a good job in presenting Alaska accurately. Now, my classmates thought he did a better job portraying Sitka and Juneau (where he’s lived and worked) than he did of the north and interior of Alaska. Straley travelled all over the state with his job, but he knows the southeast best. I wonder if because we knew his history that we were a little more critical of his descriptions of landscapes farther north.

You asked me how I integrated with the land and people and culture of the North, the Saskatchewan prairies being so different. It’s odd, but I often tell people that not too far north of where I grew up you come to the boreal forest (say Nipawin, Waskesiu or Candle Lake) and that’s a lot like the Yukon, except without the mountains. The winters in Whitehorse are a little darker, but my Grandfather watched the Whitehorse temperatures those first years I was in the Yukon and he remarked that Whitehorse temperatures were pretty much the same as Prince Albert (my Grandpa Eckdahl’s farm was between Choiceland and Snowden).

I’ll have to think more about the culture and people in the North. Early on we fell in with young people very much like ourselves—fresh from college, outdoorsy—from all over Canada. Whitehorse is somewhat transient, so it has always been easy to be new and to meet people. Taking a view of the larger Yukon society, it’s also been an interesting time in the Yukon as we arrived in the midst of land claims, which I think has been an advantage for Yukon First Nations—that opportunity as opposed to the reservation experience in other parts of the country. It hasn’t been all good, but it’s had definite advantages.

Getting back to Straley’s book, I visited Sitka for the first time this past year, and it’s a much different place from the Yukon and from Fairbanks where I’m living right now. It’s temperate rainforest, connected by plane and ferries, with different vegetation and climate. Alaska is so darn big, but it’s also a number of completely different ecosystems, geographies, people… It’s also America. I was here in the late 90s, and Alaska did not feel so different from the Yukon. I’m not as comfortable here now as I was then.

You wrote, “I appreciate crime fiction writers who can make the setting integral to the story and, subject to your comments, I could not see this story taking place anywhere but Alaska.” I think you got this exactly right. I can’t remember who told me this, but someone said that John Straley wanted to write books about Alaska and chose to write mysteries because that genre would allow him to make the place central.

I hope some of that helps. I don’t think much of the above is worth putting on your blog, but maybe there is a passage or two from my short paper that you might be interested in using.

I’ll watch for your review on your blog. Let me know if you want anymore Cecil Younger books. By the way, Straley is working on one right now, where Cecil’s teenage daughter Blossom has a significant role and there is, apparently, a Nancy Drew subplot. My daughter Jane is very excited, being a fan of Nancy.

Hope this finds you well,
Maureen

My essay from last winter. It has spoilers:

Reading Response:
“A Fur-Bearing Animal Trying to Claw Its Way out of My Stomach”:
John Straley’s The Woman Who Married a Bear
On the Canadian Thanksgiving weekend, 1994, on the recommendation of a clerk at the Babbling Book Bookstore in Haines, Alaska, I picked up a copy of John Straley’s first book The Woman Who Married a Bear. I gobbled it up. While friends fished for salmon and watched eagles, I read, feigning naps to sneak off to the tent. With the temperate rainforest around me, I remember feeling such pleasure—the hopefulness of reading a good first novel and recognizing the privilege of experiencing it in its appropriate and new-t0-me-at-the-time landscape of Southeast Alaska. Over the years I have read the rest of Straley’s Cecil Younger mysteries, making a ceremony of buying them only at the independent bookstores in Skagway or Haines. Returning to the world of Cecil and Sitka once more made me think about all the interesting things that Straley does in this first novel: setting the stage for six Cecil Younger novels to follow (and maybe more), Straley’s grounding in the animals and landscape of the Alaska Panhandle, and his incorporation of the Native characters and mythology, particularly raven and bear.
Cecil Younger is a great creation, a complicated and likable character, someone interesting enough on which to hinge a series, and someone about whom readers will want to learn more. The novel begins with one of his haikus, and when he breaks out a book by Wendell Berry we know Cecil is a man who might have been an English professor, newspaperman, poet, or any number of devious professions of truth seekers, if he hadn’t stumbled a few steps along the way into the private eye game. He is an alcoholic, not-so-successful private investigator, son of a respected judge—“the sainted Judge Younger”—and brother of a successful law school professor. Cecil knows his community must view him as wearing an aura of “failure.” As a loveable screw-up, Cecil does have the affection of everyone from cops and investigators to bartenders and tramps, and good women, who fall for this smart and sensitive soul with a heart the size of Sitka.  He is kind to his autistic roommate Todd, who in the early part of the novel, takes a bullet meant for Cecil. Normally it is Cecil who is the guy that can’t catch a break, but maybe it is even worse when it is the unfortunate Todd who gets in the line of fire.
Straley incorporates Native mythology into the novel, both subtly and overtly, and legends of two of the most culturally powerful species, ravens and bears. In the opening scene, Cecil breaks off some bread for a raven with a curious red thread tied around his leg. Cecil ponders, “Maybe someone had tried to snare him” and alludes to Native legend: “Raven the trickster: The missing piece of darkness” (4). When Cecil returns to the park bench where he has left his book, he notes, “It was just a little damp and the corners were frayed where it looked like a raven had been turning pages” (13). Ravens are a good bird for Cecil to note, as he has something like that himself—a mixture of brilliance and disaster, humour and pathos. Later at the prison in Juneau, Cecil sees “a raven hopping outside the fence line with a waxed-paper bag of French fries dripping from his beak. Raven who stole light from the darkness” (64). Indeed, raven, like Cecil, was meant for better things. Finally at the end of the novel Cecil sees an old acquaintance:  “A raven circled from over the landfill and flapped the dense snowy air above me. He landed on the stop sign in the main intersection in town. He had a red thread wrapped around his foot” (225).
Straley’s incorporation of the Native legend of “The Woman Who Married a Bear” is interesting to examine on a number of levels. The bear as a recurring motif adds unity to the story, but also complicates and compounds the mystery.