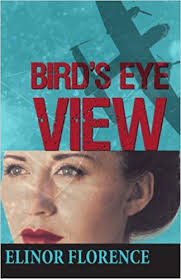 Bird’s Eye View by Elinor Florence - Rose Jolliffe is a bright eager Saskatchewan farm girl working at The Touchwood Times as World War II begins. She is the daughter of an English war bride from World War I who maried the son born to an Orkney emigrant and a Plains Cree. And Rose is ready to leave the farm, the town, the province, the country.

Her bedroom on the farm of the late 1930’s reminds me of the bedroom I shared with my sister on the farm 20 years later:

I awoke to the familiar rustling of poplar leaves. My bedroom lacked the view of brilliant grain fields sweeping away to the southern horizon, but I didn’t mind. In summer I preferred the coolness and the dim light, with the sound of the trees that backed up against the north side of the old farmhouse. They always seemed to whispering secrets.

I have never had a Jock MacTavish, the cantankerous owner / publisher / editor / reporter, of the The Touchwood Times in my 42 years of writing a sports column for a Saskatchewan weekly paper but the content of the Times is familiar with half of the paper being “home print, written by clubs and sports teams and dropped through the slot in the front door”.

As the local boys enlist she longs to join them but the Canadian government will not allow women to volunteer for the military.

Touchwood, as was the case for real life several Saskatchewan towns, had a training base for English and Commonwealth airmen.

Rose falls for a Tazzie. The young Australian is a talented musician.

Two years into the war the Canadian government relents and allows women to sign up. Unwilling to be kept in Canada Rose uses her own money to travel to Halifax and is transported to England where she enlists in the Women’s Auxiliary Air Force.

Basic training is hellacious but Rose finds she loves to march. Soon she can easily do ten miles with precise 27 inch steps. After 6 weeks she is a Leading Aircraftwoman.

When the Air Force learns she can take and develop photos Rose, to her intense disappointment, is assigned to train as a darkroom technician rather than being posted to an actual air base. She develops photos for aerial maps.

Her intelligence gains her a promotion and entry to the unit studying aerial photos. Dedicated and diligent she becomes a skilled interpreter of the never ending flow of reconnisance photos.

She sees the war daily in the aerial photos from a perspective I had never appreciated:

The typical night photo looked like a spiderweb on a black plate. Searchlight beams criss-crossed the blackness, bomb bursts showed as blazing stars, and tracer bullets from fighter planes formed arcs. Huge balls of fire called scarecrows, sent up by the enemy to simulate exploding bombers and terrify our air crews dotted the dark sky. Anti-aircraft fire looked like straight white lines, changing to blurry zigzags when the pilots jinked wildly back and forth.

A dispiriting form of wartime romance comes her way.

As she struggles with that relationship her neighbour, Charlie Stewart from Touchwood, who is flying the big Lancaster bombers writes to Rose telling her that his bomber is called Prairie Rose.

I was caught up in the story of young Saskatchewan women and men participating in the great air battles of World War II. Joys are fleeting, sorrows frequent, fear a constant, hope never extinguished.

I became anxious about the fate of the sons and daughters of Touchwood. Which would survive the war and which would not come home. There was a startling credible twist at the end followed by a further twist that was not needed.

Rose is a woman I admired. She devoted herself to her duties using her clever and imaginative mind. She contributed to the success of the Allies. There is a wonderful mini-series to be made about the “interpreters” of the millions of aerial photos. I thought of The Bletchley Circle, the series about the women who were an integral part of the decoding efforts at Bletchley Park.