The Women of Meskanaw Who Went to War 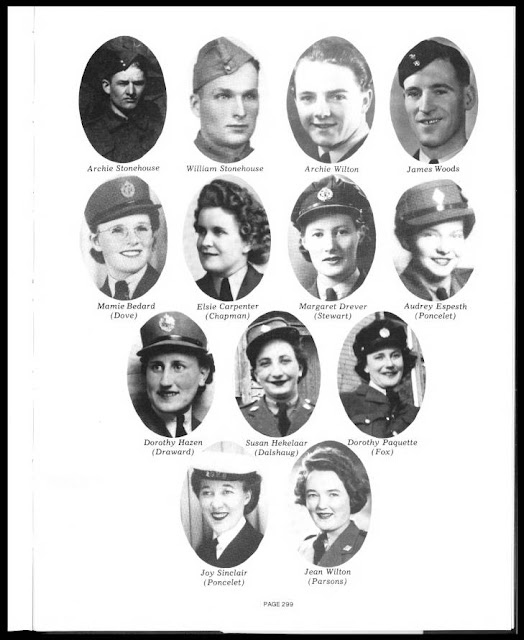 In reading Bird’s Eye View Rose Joliffe, left the farm at Touchwood in Saskatchewan to volunteer and serve in the air force, first of England and later of Canada, I thought about the women from my home community of Meskanaw who enlisted in World War II. From the approximately 150 people who lived at Meskanaw 9 women joined the military. The faces and names are in the photo above. It is a part of the first Meskanaw history book, Its Story and Its People, published in 1980. A second part to Its Story and Its People was published in 2002. Between the two volumes there is information on almost all of the women.

I knew several of the women well as a boy but not their roles during the war.

Susie Hekelaar (Dalshaug) lived just over 1 ½ miles away from our farm. Her daughter, Audrey, and I were in the same grade. She joined the Canadian Women’s Army Corp and was stationed in Regina, Prince Albert and Saskatoon. Her brother, Harry, was a paratrooper and died in Holland a month before the war ended.

I never knew of the adventurous spirit of Elsie Carpenter (Chapman). She was an outgoing friendly woman who was the mother of another classmate, Vernon. I had not realized until after the first history was published that during the difficult times of the 1930’s her family had trekked hundreds of miles north to a new farm at Meskanaw with Elsie, at 13 years of age, herding the cattle on the journey while riding her horse. During the war she was a member of the RCAF.

The smile on the face of Joy Sinclair (Poncelet) is how I remember her best. She was always active in the community. She left the open lands of Meskanaw to join the WRENs. She was a postal clerk in Ontario. The daughter of a veteran of Vimy she married a Meskanaw soldier, Dan Poncelet.

Margaret Drever (Stewart) grew up on the farm next to our farm. While she had moved away before I grew up I met her a few times. She was a member of the RCAF. She also lost a brother, Roland, who was killed in action in Normandy in 1944. He was the same age as my father.

I did not know the other five women.

Mamie Bedard (Dove) began military training in 1943 and spent most of her service in Dafoe where there was an Allied air training base.

In the second history she spoke of a vivid memory:

I remember clearly VJ Day. My assignment for the day was babysitting a senior officer’s dog (a Great Dane with a snoring problem). That morning, a group of us were waiting at Princess Alice Barracks for the pick-up van and I remember watching two rather rowdy W.O.’s (Warrant Officers) finishing their all night celebrating just outside the police service depot. Any other day, such a display would never have been tolerated and severely punished. The WO officers were never arrested and our service van never did come. I gladly missed my dog watching duties. A group of us caught a bus to Parliament Hill and watched the VJ Day Parade. That sure was a happy day.

Audrey Espeseth (Poncelet) was the only woman whose branch of the military was not listed. She returned after the war to Meskanaw to marry Bill Poncelet.

Jean Parsons (Wilton), as a member of the CWAC, was a driving instructor in Woodstock, Ontario.

Dorothy Paquette (Fox) was another who joined the Air Force. She was also stationed in Dafoe. (Note on August 26, 2021 - The Melfort Journal had an obituary that Dorothy died in Quebec at the age of 100. She had lived with her husband in Quebec after the war. She died in Oshawa. Devoted to service she knitted and crocheted into her 90's. She made over 1,500 pink, blue and white newborn hats which she donated to Lakeridge Health.)

They were young women like Rose. They wanted to serve their country and contribute to the war effort. Recognition of their service has been modest but I am sure that was not of concern to them. They did their best.