A Time for Mercy by John Grisham 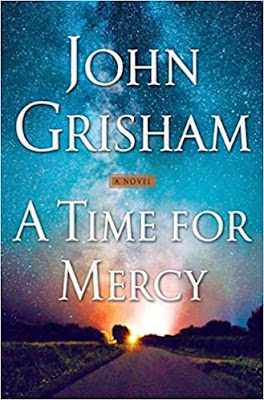 (47. - 1072.) A Time for Mercy by John Grisham - Stuart Kofer is a mean drunk with a badge. Capable and sober as a Deputy Sheriff he enjoys spending his evenings drinking and brawling. Should a fight not develop he can relieve his frustrations upon his girlfriend, Josie Gamble, and her children, Drew (16) and Kiera (14), at home. After knocking out Josie but failing to breach the barricaded bedroom door of the teenagers he passes out. Terrified of Kofer and convinced his mother is dead, Drew takes Kofer’s gun and holding it next to the deputy’s head fires a shot killing him.

The county’s Black sheriff, Ozzie Walls, is blindsided. His deputies had covered up Kofer’s private life. Ozzie does not condone misconduct but protection of their own runs deep in law enforcement. He immediately calls in the state police to investigate.

Jake Brigance will get the call to defend Drew. He made his name as a defender in A Time to Kill defending Carl Lee Hailey, a black man who killed two white men who had raped his daughter.

I thought of how a defence would be mounted. Now a boy, for Drew is a young 16 who is small and quiet in nature, has committed vigilante justice. Can a jury be convinced that he was protecting himself and his sister not exacting vengeance on behalf of his mother?

It will be a challenge for the Gamble’s are at the lowest level of Ford County society. Josie had the children by different fathers when she was a teenager. She has served time for involvement with drugs. They have no family in the county. To many they are trailer trash.

Can it be implied, even claimed, that Kofer was a man who needed killing? Unlike many books where there is a despicable victim Kofer has a family. Ozzie visits the Kofer’s. They are a clan that “had always worked hard, lived frugally and tried to avoid trouble”. He extends regret and sympathy.

Kofer’s parents and extended family demand justice. Some ask during the visit if Drew can be put on death row. It is 1990 and mercy is not emphasized in a county focused on the Old Testament rather than the New Testament.

Knowing Judge Omar Noose is likely to appoint him, Brigance is conflicted. It has been 5 years since the turmoil of the Hailey case. For 3 years after the trial a “deputy parked in front of their house at night”. Does he want “another high-profile, controversial case”? Prominent cases have not come his way as he expected after the Hailey case. He wants to be known as a lawyer unafraid of and successful at jury trials.

All the residents of Ford County are relieved the participants are white. None want to deal again with the racial issues of a killing involving black and white.

Brigance’s good friend and fellow attorney, Harry Rex, forecasts no public sympathy for a cop killer even if Drew is 16. He predicts devastation for Brigance’s law practice.

The good people of the Good Shepherd Bible Church, which the Gamble family had attended a few times, led by their young pastor, Charles McCarry gather around Kiera and Josie in support.

And Brigance and Rex are deeply involved in the Smallwood case. A family was killed at a dangerous railway crossing and they act for the family against the railroad. The defence is about to run out of delaying tactics and a trial is ready to be scheduled. While a trial is a major risk there is the potential of a multi-million dollar verdict in favour of the family.

When Brigance meets his client he is startled by how small and young Drew appears. The boy is deeply withdrawn. He spends hours humming and groaning to himself. He does say he killed Kofer because Kofer had killed his mother. Self defence has just become much harder to claim to a jury. More will be needed to plead to the jury that the killing was justified. If Brigance is to blacken Kofer he needs ironclad evidence. The town and county folk who will form the jury are already upset with Brigance for taking the case. And it is impossible to see them accepting an insanity defence

Pressure is already building in the Smallwood case the insurance company lawyers can see the community turning against Brigance. They are quite ready to let it build.

Then I realized the book is really about Brigance. The cases set up his life but the story is about practising law in rural Mississippi. I wiil discuss the life of a rural lawyer in Mississippi and Saskatchewan in my next post.

Jake’s preparation for the trial is careful and thorough. Unlike most authors Grisham delves into the hard work of getting ready for a major trial. Such are his gifts as a writer that the pace never flagged.

Hard as it may seem for readers outside America it was a capital trial with the prosecutor seeking the death penalty for young Drew. With the highest consequences possible tension rises and rises.

I appreciated the prosecutor was skilful and doing his job. Grisham refrains from making him a bad guy.

Jury selection is taut with each side seeking jurors who will favour their view.

The trial is riveting. I could see every witness. The questions and answers were absolutely credible. The way answers were subtly shifted from original statements to achieve emphasis happens in every real life trial.

A reader best set aside the time needed to read the trial in a single session. It is Grisham at his best. The detailed build up on the trial preparation lets you anticipate witnesses. The emotions are raw. The trial decisions of the lawyers are agonizing as they analyze who to call or not call. There are unexpected questions.

For half the book there was an inexorable increase in anxiety over a pivotal witness whose evidence readers know will be shocking to the jury. I was so tempted to read ahead to see what happened but held back just barely.

There is a devastating answer by that witness that is so perfect I will remember it the rest of my days.

It is gripping and page turning. The ending may disappoint some but it is fitting.