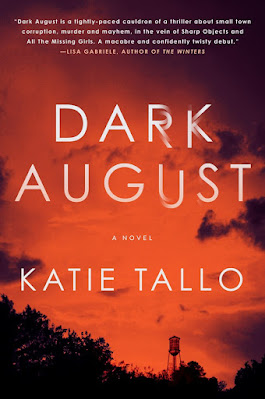 (45. - 1070.) Dark August by Katie Tallo - I was profoundly sad as I read of Augusta “Gus” Monet as a child. With her father already dead, her mother Shannon dies in a car accident. Gus is 8  and left to an uninterested great-grandmother, Rose. Her stuffed animals (Claudius, Louis, Praline and Girly) are left behind. No one remains to call her Sugar Bunch.  Two years later Gus is sent to boarding school. Having gone to boarding school at 15 I feel her overwhelming loneliness.

For a couple of years after high school she drifts along in petty crime until she gets a call from Ms. Santos, the long long time caregiver of Rose, that her great-grandmother has died. She returns to Ottawa.

Gus camps out in Rose’s decayed home avoiding the need to give the house some “curb appeal” so it can be sold. Sharing the house is Levi, the dog her mother brought home 12 years earlier. While Levi tries to win her over Gus is a challenge. She is lost in her mind constantly running through her life.

Her HIlroy notebooks filled with doodles. Her plastic art kit, pastels, crayons and colored pencils worn to the nib. Sunny, her yellow-haired doll with the ceramic feet, wearing the same pink pinafore with the lacy pockets. A collection of clip-on earrings in the emerald silk bag. Her Barbies. Her beanbag frog, Louis. Class photos from Junior K through grade three. Swimming medals. Olympic coins. Her sticker collection. And rolled up right where she left it. Her pink pashmina scarf. The one her mother have her their last Christmas together.

Gus finds  hidden in the trunk photos, reports and clippings of a cold case her mother, an RCMP officer, was studying. Her father had also been an RCMP officer. When she was 8 Gus asked her mother if she was keeping the cold case warm by reviewing it.

Teenager Henry Neil had disappeared 15 years earlier but his body has just been found. Gus re-creates the collage of documents and photos on her living room wall as her mother had placed them on the garage wall where she worked at home. Gus finds a red marker to re-draw the lines her mother had used to connect the evidence. She takes comfort from re-creating Shannon’s wall.

There is also evidence of the death of a young woman of 23, June Halladay, in a freak car accident a year before Neil vanished. Shannon has a photo of Gracie, June’s 7 year old daughter, on the wall. June was the daughter of the wealthy Senator, Kep Halladay. Kep is also dead.

The disappearance and the accident both take place near the small community of Elgin, Ontario not far from Ottawa. Her curiosity piqued, Gus makes a road trip to Elgin but cannot reach the town. All roads are blocked by signs stating “hazardous toxic waste”. Fracking for natural gas encountered a deep crack in the earth. The resulting explosion and fire 5 years ago destroyed Elgin and devastated the countryside.

As Gus walks through Elgin I thought of Chernobyl. It was a lovely village that was turned into a wasteland. The crater at the epicenter of the explosion is still a bubbling cauldron.

More than most people Gus can appreciate the disorienting effects upon the psyche from a disaster that alters life permanently in an instant.

A startling connection between Kep and Shannon grabbed the attention of Gus and myself and every other reader of the book. The connection and secrets revealed about her mother drive Gus to find out what happened.

Having had no purpose in life Gus now delves into the tangled collective destructions of a family, a town and her mother with a fierce determination. She has been a victim long enough.

But why is there such secrecy? The cause of the disaster is well known. Compensation, no matter how inadequate, has been made. Who cares about Gus’s quests?

There is darkness to the story even during the long hot days of the Ontario summer when secrets revealed clash with long cherished images.

I appreciated that Gus was treated as an unskilled investigator. She tries to be logical but tends to improvise. It is a credible approach.

Few mysteries undertake an exploration deep into the minds of a daughter and her deceased mother. To her dismay Gus realizes how little she really knew of her mother.

There are layers to the secrets. The truth is a stunningly believable revelation.

As befits the story there is dramatic finish. After reading a hard story, uncompromising in the telling, I was a touch disappointed by the ending. Tallo did not need to go Hollywood. I expect most readers will be satisfied.

Tallo is a talented writer. At one point Gus considers words of sympathy:

But she knows words won’t matter. They never do. Once regret seeps into your bones, it lives in your marrow until the day you die.

I will definitely read more of Tallo. She has gifts for characters, atmosphere, tension and psychological insight. Most important I will remember Gus. Damaged, not broken, she is especially memorable for her tenacity in clinging to love.