Lee Crawford, in What’s Left Behind by Gail Bowen, is a Saskatchewan farmer who raises heritage poultry. The birds include “Blue Andalusians, scarlet-combed Langshans, Swedish Flower , Ridley Bronze turkeys and pink-billed Aylesbury ducks”. She is raising the birds to help keep the varieties alive and promote diversity in poultry. I had never heard of any of these birds.


In the book they are described as beautiful distinctive birds and Joanne's daughter, Taylor, creates paintings of the birds.


I went through the internet to learn about and find photos of these heritage poultry.


According to Wikipedia the Blue Andalusians are:


The Livestock Conservancy website advises that Langshans are large feather legged chickens who originated in China:


The Langshan had been bred in this damp district for centuries and was prized for good reason. The breed, though smaller than the Cochin and Brahma, is a large breed with males weighing 9.5 lbs and females 7.5 lbs. Langshan chickens lay a large number of very dark brown eggs; the eggs sometimes having a purplish tint. The breed has white skin, full breasts, and an abundance of white meat rich in flavor. The white meat of the Langshan is also particularly white in color.


Greenfire Farms on its website advises it brought Swedish Flower Hens to America:


﻿
Swedish flower hens are the largest breed of chickens native to Sweden. Roosters can weigh as much as 8 lbs. With the commercialization of Sweden’s poultry flocks in the last half of the 20th Century, this breed almost became extinct. A couple of decades ago remnant flocks were identified in three small, rural Swedish villages and a focused effort was made to save the breed. By the late 1980s fewer than 500 birds existed in the world. Today, about a thousand Swedish flower hens live in about fifty scattered flocks, and until Greenfire Farms began working with this breed, few if any could be found outside remote villages in Sweden.


I was startled to learn that the Ridley Bronze turkeys originated in Saskatchewan! I think of breeds coming from far off lands such as the Langershans rather than just down the road. I feel I should have known about them. The Heritage Livestock Club of Eastern Ontario sets out their background:


The Ridley Bronze turkey was developed by John Richardson of Saltcoats, SK during the 1940’s. He wanted a calm, hardy, meat turkey that was prolific and could reproduce naturally. He sought out the best stock available, crossed them together and created his ideal. While doing so, a turkey strain unique to Canada was born.


During the 1940’s and ‘50’s, the Ridley family became involved in farming this turkey strain as well. Maree Willis (nee Ridley) and her husband Fred established their own turkey farm also in Saltcoats, SK, followed by her brother George Ridley who developed his own turkey breeding farm in Leslie, SK. In the early ‘80s, the University of SK obtained turkey stock from George Ridley for study and breeding.  It was at this time that this turkey variety garnered the name “Ridley Bronze” by way of the university. By 1981 the Ridley families were no longer turkey farming and had dispersed all of their turkeys, so the Ridley Bronze turkey remained solely in the hands of the university as well as a handful of private breeders. In 2008, budgetary constraints resulted in the closure of the University of SK program and their flock dispersed to private breeders across Canada. This dispersal went poorly with the result being that they all but disappeared.


Sadly their survival remains precarious. There were but 250 breeding females identified in 2015.


The Beauty of Birds website has a great story on walking Aylesbury ducks: 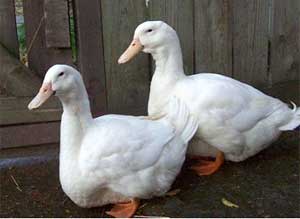 The breed was developed around the early 18th century and became a cottage industry in Aylesbury in southern England. The ducks were walked to the markets in London, some forty miles (64 km) to the south, stopping at night at inns which provided large enclosed yards for a charge of a few birds. Each morning the feet of the birds were given some protection by driving them across a shallow ditch filled with cold tarry solution which made their feet sticky, then through sawdust which adhered to their feet.