This week the Alphabet in Crime
Fiction hosted by Kerrie at Mysteries
in Paradise has reached "I".
I am posting a triple "I"! See all
the other entries on Kerrie's
website.
***** 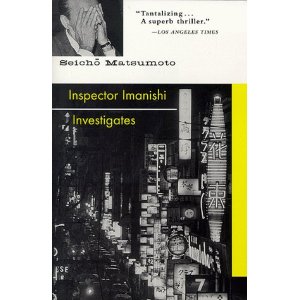 29. – 439.) Inspector Imanishi Investigates by Seicho Matsumoto – A mystery written and taking place in Japan of the late 1950’s. A man is found beaten to death and placed upon railway tracks under a train. Inspector Imanishi starts out on an incredibly difficult investigation. There is great difficulty determining the victim’s identity. While witnesses can identify him with another man shortly before his death with an unusual accident the inspector struggles to find any connection between the deceased and the area of Japan where the accent is most common. The inspector is incredibly dogged in following the slender threads of the investigation. A parallel story follows the Nouveau group – several young intellectuals bent on changing Japan’s approach to the arts. Three more unusual deaths occur but none seem to have a means of homicide. The inspector is unusual in having a loving wife and son. While we would consider his focus on his job excessive they have a strong marriage. In the police department he is respected and respects his superiors. It is so different from most contemporary mysteries where there is frequently a lack of respect, support and co-operation between investigators, supervisors and administrators. Chasing Darkness illustrates the current approach. It was very interesting. I will look for more by the author. Hardcover or paperback. (July 18/08)
Posted by Bill Selnes at 11:00 AM