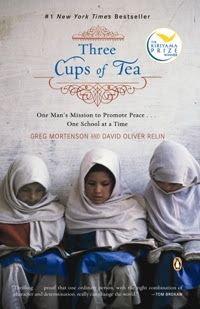 10. – 569.) Three Cups of Tea by Greg Mortenson and David Oliver Relin – Mortenson personifies the dedicated, near obsessive, power of the individual to do good. Barely escaping with his life from an climbing expedition on K2 in the 1990’s Mortenson, appreciating the hospitality of the small Balti village of Korphe “the last village before the land of eternal ice”, decides to build them a school after seeing children practising lessons, without a teacher or supplies beyond sticks, in an open field. The depth of his commitment is only matched by his naivete. For a man raised in by parents on a Lutheran mission and working in big city hospitals he has a striking disregard for organizations.
Returning to he manages to raise the money on his own. No sophisticated fund raising schemes are involved. Sheer persistence is blessed by a mountaineering relationship.
When he returns to Pakistan Mortenson learns the real importance of local support in projects. Gradually he develops a Balti team and the school is built. As the project proceeds Mortenson gains greater insight into the educational needs of rural and refines his focus to building schools concentrating on the education of girls.
Mortenson’s personal network reminded me how Rotarians use local Rotary clubs to work with on Community World Service projects. As Mortenson, through the Central Asia Institute, built schools in Baltistan, so our Rotary district 5550 has been building schools in an area of in the Ripple Effect project. The best aid projects proceed through the local people.
I was struck the lack of government regulation. There were neither permits nor licences nor approvals nor studies nor reviews needed by Mortenson before the schools are built.
When he included in his efforts I thought of the school our Rotary zone is building to educate Afghani women.
Mortenson describes the challenges of Afghani women seeking to resume education after the fall of the Taliban. Sharon and I met a young woman doctor in on a speaking tour who only completed her medical education after the Taliban were driven from power. She had been forced to stay home during the Taliban regime.
Mortenson, as with Wiesenthal, an individual totally committed to his work does not adapt well to organization. They would just like money to be given to them for their projects and have the sponsors stay out of the way.
I admire Mortenson’s courage and dedication. Having experienced Rotary I wonder if he could do more had he brought his dreams into a large service organization or whether his stubborn independence produced greater results.
The Canadian military has been trying to win hearts in for a decade. Who will achieve more – Mortenson without a single gun or the projects supported by the powerful guns of ?
The local support Mortenson received from Moslems across the region for the education of women gives me hope that the Taliban will not be allowed to regain power and stifle women. Excellent. (Feb. 15/11)
Posted by Bill Selnes at 11:30 AM