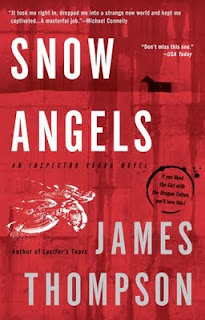 24. – 583.) Snow Angels by James Thompson – Where the Canadian winter in Louise Penny’s Bury Your Dead is bright and cheery Thompson’s Finnish winter above the Arctic Circle is dark and grim. It is the time of kaamos when the sun disappears totally for two weeks. Even the permanent residents of Lapland struggle with depression.

As Christmas nears Inspector Kari Vaara is looking forward to the holiday season with his lovely pregnant wife, Kate. Happy holidays are banished when he is called to a reindeer farm where the body of a beautiful Somali immigrant, Sufia Elmi, has been found in the snow. In her death throes she has thrashed about creating a snow angel.
It is gruesome and cruel death described in great detail at the scene and at the autopsy. I understand some mysteries effectively avoid the brutality of death by providing no detail.  While appreciating the Thompson’s skill at graphic depiction I found the detailed gore excessive. It was distracting rather than powerful.
For Vaara, living in his hometown, it is the case of a lifetime. The glare of modern media will focus upon Vaara. Is the rural northern inspector up to the challenge of such a high profile case?
Vaara is aided in the investigation by Valtteri, an experienced police officer who is also a Laestadian (an austere and demanding Lutheranism). The police department is so small that Vaara carries his own forensic kit to crime scenes.
With the death occurring in the tiny village in which Vaara grew up we are introduced to Vaara’s family and neighbours. They are a most eclectic group. Thompson’s imagination was working overtime in their creation.
When a murder is particularly vicious in real life or fiction the residents of the area expect the killer must have come to their town as who among friends, neighbours and families could be a monster.
Vaara is an intelligent investigator who logically follows the strands of information to a horrible truth.
I enjoyed the book and will read the next in the series. I am not sure if I will continue if the detail on death is as extensive. I find myself reluctant to read Giles Blunt for the same reason. I find it hard to enjoy books which I know will contain extended descriptions of violence. (May 11/11)
Posted by Bill Selnes at 1:15 AM