A Case of Two Cities by Qiu Xiaolong

For the letter "X" in the Alphabet in Crime Fiction hosted at Mysteries in Paradise I have featured Qiu Xiaolong with a short biography, a review of Death of a Red Heroine last night and a review tonight of a later book in the series. 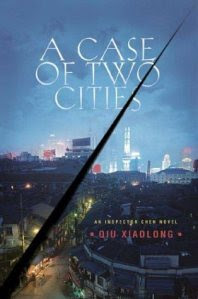 23. - 582) A Case of Two Cities by Qiu Xiaolong – In the mid-1990’s Chief Inspector Chen Cao is given the challenge of investigating the highest profile anti-corruption case in China. The exploding economy has provided has provided irresistible opportunities to officials up and down China’s huge bureaucracy. Xing has intertwining connections that reach upward as far as high comrade cadre children and possibly higher. Comrade Zhou from the Party Discipline Committee reaches out to Chen to lead the investigation. He is appointed the Emperor’s Special Envoy with an Imperial Sword. He has the right, in an emergency, to search and arrest without warrant.

Knowing he must proceed carefully Chen begins to probe the relationships of Xing. While he believes he is proceeding delicately there is an immediate reaction. In his first interview he is skillfully offered a bribe and has his mother’s safety threatened. Moving with greater subtlety and sometimes using non-official sources Chen starts to make progress.
Abruptly he is pulled from the investigation to lead a Writers Delegation to the U.S. Chen suspects he has been getting too close to the top.
In America the poetry loving and writing Chen does his best in his new role. At the same time he continues to find ways to lead the anti-corruption investigation.
While an honest men there are some uncomfortable personal connections. Chen receives benefits, modest but useful, from businessmen to help him with the investigation. When does money to assist an investigator to do his job become a corrupt payment?
The descriptions of meals are amazing. Chinese chefs create special dishes from every part of fish, fowl and animal.
In America Chen renews his fragile relationship with Catherine Rohm from the U.S. Marshals Service.
Bzyantine is an inadequate phrase to describe the complex relationships that dominate modern China.
Exquisite Chinese poetry enhances the plot and produces a reflective detective. It is a powerful contrast to the crude language of many modern detectives. You will not find the following in hard boiled fiction talking about a couple apart:
So many days, where have you been –
like a traveling cloud
that forgets to come back
unaware of the spring drawing to an end ….
It is an engaging book giving insight into China while being an excellent mystery. (May 5/11)