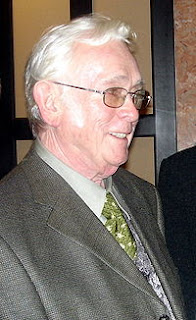 The following post was inspired by my reading of The Miracle Game. My review is the post below this post. A photo of the author, Josef Škvorecký, is to the left of this post.


The hero of The Miracle Game, Daniel Smiricky, resonates with lovers of mysteries. In addition to writing operettas he, like his creator Skvorecky, has written mysteries.


Residing in the Eastern bloc from the 1940’s to the 1970’s, Smiricky is caught up in the perversions of analysis of the written word - books, poems and songs – conducted on a purely ideological basis.


There is an amazing, funny but frightening, description of translation and literary analysis in the Soviet Union. An English novel is heavily edited in translation in the U.S.S.R. to reduce or delete scenes not consistent with the Soviet norms of the class struggle. Forewords and afterwords are included to explain the story by Marxist doctrinal analysis. Reviews are written, some by reviewers who have not read the book, in conformity with the party line. There is but a thread left of the original story.


Later in America after Prague Spring has been crushed Smiricky attends a meeting of the far far left. The Chairman is a committed Maoist committed to the People’s Republic of China and the People’s Albania. The Soviet Union is revisionist to the Chairman.


Smiricky challenges the Chairman by raising the name of Aleksandr Solzhenitsyn as a writer about “conditions in Soviet prisons and concentration camps in the Stalinist era” who is “being persecuted by the imperialist revisionist Soviet clique”. Hearing Smiricky has read him in an English translation published in the United States the Chairman dismisses Solzhenitsyn:


“The writer is simply consciously or unconsciously an
agent of American imperialism and therefore has come
into conflict with the interests of the Soviet imperialist
revisionist clique. So they persecute him.”


The Chairman, looking at books by Mao, concludes that he does not read such authors but reads “books from which I learn the truth”.


For Communist states and devout Communists such as the Chairman book analysis must be done by political principles.


How much are current reviews shaped by the country in which reviewers reside and the political regime in power? In the blogger world of 2011 I do not see reviews determined by nationality and politics.


In North America we live in an era of political correctness. Prior to starting my blog I wondered, whether there is a growing self-censorship in book reviews to comply with current accepted standards of what is right in life and opinion.


Thankfully in the book blogs I read the reviews strive to capture the story being told. They seek to provide accurate descriptions of the plot. Conclusions and observations and opinions are personally offered. The reviews are not centered in ideology.


I appreciate all bloggers are influenced by their personal beliefs, backgrounds, education, age, sex and other factors. I am grateful we are not driven to analyze books by a rigid ideological philosophy.


Our blogs would not survive long in totalitarian states. Bloggers are too independent in thought to be tolerated by dictatorial regimes.
Posted by Bill Selnes at 8:36 PM