The Time of Murder at Mayerling by Ann Dukthas 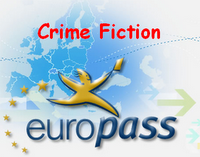 46. – 606.) The Time of Murder at Mayerling by Ann Dukthas - This week the Crime Fiction on a Euro Pass meme hosted by Kerrie at her blog, Mysteries in Paradise, cross the border from Germany to Austria. During our spring trip to Europe Sharon, Michael and I stayed on the Bavarian side of the border at Kirchdorf across the river from Braunau, Austria. On a day trip we visited the remarkable collection of planes, vehicles and motorcycles assembled by the founder of Red Bull at Salzburg at Hangar 7 (a link to the site is http://www.hangar-7.com/). The book I have chosen goes back to the 19th Century when Austria was at the heart of the Austro-German Empire. 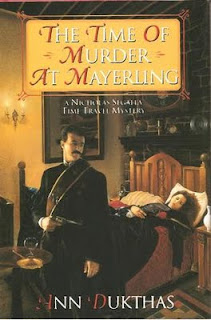 Nicholas Segalla is a mysterious figure. He is a man who never dies wandering the earth because of some ancient curse. Segalla gives the author Ann Dukthas, which is a pseudonym, manuscripts providing the “truth” concerning history’s mysteries. (It seems I am encountering more pseudonyms than usual this year in Inger Ash Wolfe, Alix Bosco and now Ann Dukthas.)


For this book Segalla has delved into the deaths of Prince Rudolph and his teenage lover, Maria Vetsera, in January of 1889 in the Prince’s hunting lodge at Mayerling near Vienna.


The official and historical version is that Prince Rudolph, heir to the Austro-Hungarian empire, shot Maria and then killed himself in a suicide pact. To gain a Catholic burial for his son Emperor Franz Joseph advises Rome that his son was not in his right mind when the deaths occurred.


The pope, wanting confirmation, requires the emperor allow an envoy from the Pope, Segalla, investigate the deaths. A resentful emperor and his prime minister, Edward Taaffe, seek to restrict the investigation.


Accustomed to working around those who would limit his investigations Segalla skillfully probes the firmly stratified society. The evidence for his consideration has been carefully assembled by the bureaucracy. While the official story is superficially plausible Segalla pulls at the weaknesses and inconsistencies. He searches out witnesses who have not been coached.


Life in the empire for the elite was very focused on their personal relationships and status. The problems of the empire received little attention from them. It is an unsettled time with nationalities stirring throughout the territories. Prince Rudolph differs from much of the aristocracy in considering changes to the empire. It is said he was supportive of Hungarian independence. There are rumours he is interested in being the king of Hungary. Would the leaders of the empire silence him to save the empire?


I found the book alright. It is a high level form of procedural with an unusual investigator. It was interesting to learn about the mystery but the book did not grab me. I think I will read another book in the series to see if I like it better. (Aug. 20/11)
****
Ann Dukthas is one of the pseudonyms used by English author, Paul Doherty. His website says he is no longer writing pseudonyms -http://www.paulcdoherty.com/pages/bib/dukthas.html